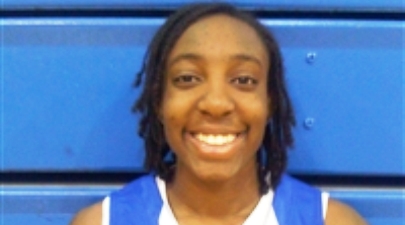 Dobson High School's 5-foot-8 senior guard Katherine Hamilton is among the state's best talents - regardless of class.  After an impressive junior season where she led her Mustangs to a 24-9 overall record on the season, and a semi-final finish in the Division-I state playoffs, Hamilton became one of the most sought after recruiting targets in Arizona's 2013 class.

According to Dobson HS head coach Tyler Dumas, he recently reported that his talented guard prospect has decided to end her college recruitment - giving a verbal commitment to the University of San Diego and head coach Cindy Fisher and her staff  Hamilton will join another former Dobson HS graduate on the Toreros roster - 6-foot-3 rising junior forward Kameron Knutson.

Hamilton chose to commit to San Diego over heavy interest from such schools as Utah, Colorado, Providence and Northwestern.

This past season, Hamilton finished with her best season of production - averaging 14.1 points, 8.3 rebounds and 3.9 steals per/game as a junior.  Hamilton will look to have a big senior season for the Mustangs.

Hamilton also raised her recruiting stock in the off-season while competing for Greg Strickland and his talented GSB Hoops club program.

Arizona Hoop Review Scouting Report:  Hamilton is an athletic shooting guard prospect with a very good overall skill level for the game and a serious motor.  She possesses one of the best looking jump shots in the state, and is able to get her shot off effectively amidst defensive pressure, where she is able to create her own shot off of dribble drives and one-dribble pull-ups.  Her ability to handle the basketball in the open floor allows for her to score effectively in transition.  She is also a good passser of the basketball and enjoys finding her open teammate on the floor - possessing very good court vision.  A fundmentally sound prospect.  Also a very good defender with good anticipation on the floor.  Hamilton plays the passing lanes and is capable of becoming a lock-down defender over time.  A very good looking guard prospect that is currently ranked among the elite prospects in Arizona's 2013 class.