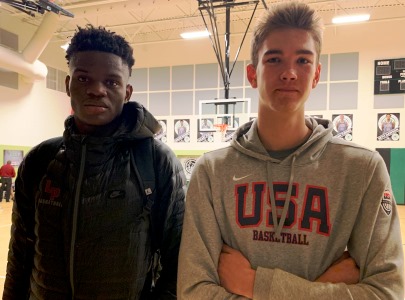 The state of Arizona basketball is literally at an all-time high today.  While the present is very bright with the emergence and development of the prep schools around the state, the future is even much brighter with the emergence of top young prospects such as 6-foot-11 sophomore post Dylan Anderson and 6-foot-9 sophomore forward Sadraque Nganga.  Anderson, a 6-foot-11, 200-pound sophomore from Perry High School, and Nganaga, a 6-foot-9 sophomore from Angola, Africa, that attends AZ Compass Prep, are each changing the game in the state of Arizona.

With many high-major division-I college programs now focusing on top-rated younger prospects around the country, especially in America's 2022 Class, Anderson and Nganga are seeing their college recruitment begin to really take shape. Recently, both prospects received offers from the University of Kansas and their coaching staff.

Anderson has already competed in USA National Team trials in Colorado and is among the Top 20 prospects nationally among the 2022 Class, while Nganga may be the best player to ever come out of Angola, Africa, and is also rated among the top 20 players nationally in the 2022 Class.

Nike has already been very evident in the present and future careers of both prospects.  Nganga competed in the Nike Peach Jam during his first summer (2018) with the Nike-sponsored Las Vegas Prospects (NV) after just landing in the United States, and last summer spent time with Lebron Jame's program.  For Anderson, Nike has given the state of Arizona it's first Nike shoe sponsorship since the Arizona Stars had their deal many years ago - creating a new Nike club program in the state known as the Arizona Supreme.

Anderson is already an amazing 6-foot-11 in height and has very good athleticism, versatility and mobility on the floor for such a young prospect.  He is very fluid in his approach to the game, and is very advanced in his approach.  Anderson is already excellent size and length and has a high-major skill level already.  Perry HS had their struggles this high school season, but Anderson is gained valuable experience early.

Nganga has played a vital role on this year's Hillcrest Prep and AZ Compass National Teams, as left AZ Compass Prep before the season for Hillcrest Prep and then moved back to the Compass Prep program during the middle of the season. Nganga immediately stepped in and proved that he is as good a prospect as there is in America's 2022 Class of prospects.  Nganaga is a very lengthy, rangy and skilled prospect with a very good feel for the game and an ability to make plays for himself and others.  He is a big-time future prospect that has budding young prospect written all over him.  He has a striking resemblance as a player early to that of current NBA top performer Rudy Gay.

Both prospects had looked to gain much more recruiting attention this spring and summer, while playing on the club circuit, but due to the COVID-19 virus pandemic, both prospects will have to rely on their current recruitment path, in hopes of landing more college attention during the 2020-2021 high school basketball season.

Look for these two promising future pro prospects to become two of the hottest recruits in America over the next year, and gain loads of national recruiting attention and exposure to every scouting service and exposure video service in the country.