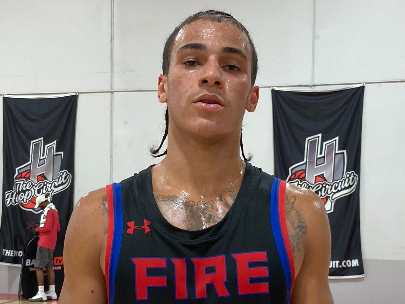 One of the elite prospects in Arizona's 2021 Class of prospects will pick up his game and college recruitment as a post-graduate now. Gifted 6-foot-1 unsigned senior point guard Justus Jackson has decided to keep his recruiting options open and extend his recruitment through attending a post-graduate year. Rather than stay in the state of Arizona, Jackson recently chose to leave the state and enroll at a prep school located in Florida.

Jackson has landed @ DME Academy in Florida - a newer prep program that will help to feature the talented Jackson this prep season. It was thought that Jackson would be headed to the BIG-12 Conference after his strong performance this summer, after he received an offer from Texas Tech, but he found out late that he was an 1/2 credit hour short of being academically eligible - still needing a one math class to be cleared by the NCAA Clearinghouse. While very disappointing to Jackson, he decided, rather than completing the class online, he would just attend a year in the post-graduate ranks.

Jackson is a very nice recruiting target now as a post-graduate, as he was among the elite scorers and overall performers last season on The Grind Session. He also turned in a strong performance throughout the spring and summer - proving his tremendous value as a scorer and playmaker.

I spoke with Jackson recently, and he advised me that he is enjoying the prep school in Florida and that he is excited to re-open his college recruitment. While Jackson was one of the hottest prospects in the 2021 Class as a sophomore and junior, he did not receive an offer throughout his senior season, which was a mystery of sorts, only to receive an offer from Texas Tech in late July.

Jackson is also a rare find among guard prospects in the sport, as he plays with a superb level of self-confidence in himself, and is able to do just about anything that he wants, and even when he wants to. He can get to anywhere he wants to on the floor, and make plays happen at a high level. As he matures as a player, he will go to another level at some point, and will reach new heights as a leader and producer, which is why his game and level of talent translates to any level of college basketball. He has the athleticism and skill-set to play at any level, and also has a true position, which will make that possible for him.

I will continue to watch Jackson's college recruitment closely, and bring you any recruiting updates as they continue to develop.