JT Elder Is Off The Board, Verbals To SEC Program 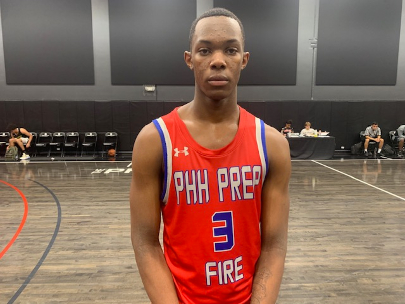 One of the hottest prospects in the state of Arizona this fall has been PHH Prep's talented 6-foot-7, 190-pound prep wing JT Elder. While a member of PHH Prep's loaded post-graduate program, Elder has thrived this fall with numerous strong performances, which resulted in some big Division-I offers for himself as of late. While it definitely helps to play for the consistently strong PHH Prep program and local basketball aficionado John Ortega, Elder really helped himself with some natural maturity and playing with superior confidence. As a result, Elder reeled in several big offers this fall, and now has decided to end his recruitment just before the NCAA's Fall Signing Period in November, and will play in the SEC Conference next fall.

On Tuesday morning, it was announced by the PHH Prep basketball program that their latest basketball prospect to commit to a Division-I program had been Elder, as he gave a big verbal commitment to the University of Georgia and Head Coach Tom Crean and his experienced basketball staff. Georgia recently offered Elder, and has done an excellent job as of late recruiting numerous top-rated prospects in the state of Arizona - extending offers to numerous Arizona prospects in different classes. Elder decided that Georgia would be the right fit for his college future, and pulled the trigger with the Bulldogs.

Elder had recently received another big offer from DePaul University, and it had looked as if he might be headed back home to his native city of Chicago after receiving the offer, but the extended offer from Georgia was too much for Elder to pass up. It was thought that Elder was heading to Portland State this fall (2021), after he previously committed to the program last season as a senior. but after an off the court issue, Elder was forced to re-open his college recruitment and look at other options for college - resulting in a much bigger opportunity for Elder.

I have been very impressed with Elder's ability to play the game. At his height and skill level, combined with superb athleticism, Elder is a true talent. Very skilled, Elder is a bigger wing prospect with a nice motor and an ability to score inside and out, while possessing a very nice mid-range game as well. He is very good in the open floor and has excellent versatility as a player. He is a strong scorer and shooter of the basketball with nice range on his shot, and takes high percentage shots, within the offense. He has a pure shooting stroke which really sets up his ability to attack off the dribble nicely, where he is able to create his own shot and finish strong at the rim. He also has a very smooth pull-up jump shot from mid-range - making him difficult to defend for opposing defenders. He is also a good ball handler and passer and can play several positions on the offensive end, at different times within the offense, while also being able to defend several positions on the floor as well. He is an active rebounder and pushes the basketball on the break. Also a good passer that enjoys sharing the basketball and plays the right way.

Elder has really developed during his time at PHH Prep, and it has now really paid off for the gifted prospect. I watched Elder specifically last season with long-time, legendary junior college and high school basketball scout and close friend Jerry Mullen last season, and we both agreed that Elder was a high-major prospect, after several performances where he played exceptionally well. Now our evaluation has come to reality with the extreme help of Ortega and his coaching staff's close relationships with college coaches.

Elder will sign a national letter of intent during the early fall NCAA Signing Period in November.

Congratulations to this young man, his family and the PHH Prep basketball program on this amazing accomplishment, but especially to Elder who overcame adversity in his life to reach higher heights in his life. This is another amazing story that has taken place in Arizona basketball, and is a true inspiration to younger basketball prospects in the state about hard work and staying the course - trusting the process.

Here is a previous interview that I did with Elder after his previous commitment to Portland State University in 2020.