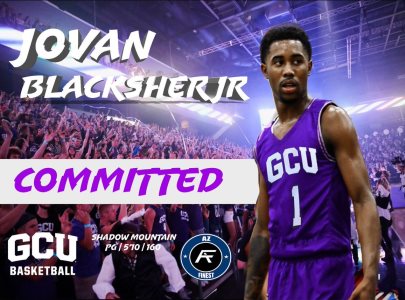 While many basketball enthusiasts close to the recruitment of Shadow Mountain High School's star guard Jovan Blacksher had known for some time that he and his family really liked the Grand Canyon University program and staff, it was unclear as to whether he would commit, and, most importantly, when he would commit.  Blacksher answered that question this weekend, when he decided to end his college recruitment and give Dan Majerle and his staff his pledge.

Blacksher is a tremendous get for the GCU program - one of the elite overall prospects in Arizona's talented 2019 Class. Blacksher is a unique guard talent that has had a superb high school career, and is coming off another terrific junior season for himself, and also a big spring and summer.  After recently leading the Nike-sponsored Team Why Not to the finals of this year's Nike Peach Jam on ESPN, Blacksher should see a nice improvement in his overall college recruitment.

Blacksher has had a storied high school basketball career in the state of Arizona, and last season as a junior was no different, as he helped lead the Matadors to third-consecutive state title.  Shadow Mountain (25-2) would not lose a game in Arizona all high school season, once again, and would eventually lose their first game of the high school season to Findlay Prep (NV) (83-74), before falling to University HS, 75-63, in the Dick's Nationals Basketball Tournament on ESPN.

I really had really enjoyed watching this young man perform over the years, and he is the best true point guard in Arizona's 2019 class.  The addition of Blacksher to the GCU program, while also joining other former fellow Shadow Mountain star J.J. Rhymes at the program, will be huge for GCU in their pursuit of gaining recruiting steam with other top-rated prospects.  Blacksher will now help to recruit other top-rated prospects to the school - a great ambassador for the rising GCU program.

Congratulations to Blacksher and his family on his big commitment to Grand Canyon University from our staff here at Arizona Preps, and good luck to him in the future as he helps to lead the future for the GCU program.

Arizona Hoop Review Scouting Report:  Blacksher is a unique talent in the state of Arizona.  While Blacksher is a smaller point guard prospect, he is a unique talent in the state of Arizona - a highly skilled and talented point guard with an ability to make plays for himself and others almost at will and with flare.  This young man is fun to watch perform as he possesses a superb handle of the basketball, excellent court vision and body control, which allows for him to get into the lane when he wants to and make plays at a high level level.  He also possesses a nice shooting stroke with excellent range on his shot and a quick release - making him very difficult for opposing guards to defend.  Blacksher is a rare find in the state of Arizona, as he possesses a high level of self-confidence in his play, which rubbs off on his teammates and makes players around him much better.  He is a high-powered guard prospect that plays much bigger than his size suggests, and is a one-man press-breaker that is dificult to defend.  An excellent passer and playmaker.  An excellent on-the-ball defender that is capable of becoming a lock-down defender at the next level.  Plays passing lanes and gets his hands on the basketball often.  A superb young guard prospect that has a true position, and you can build your program around.