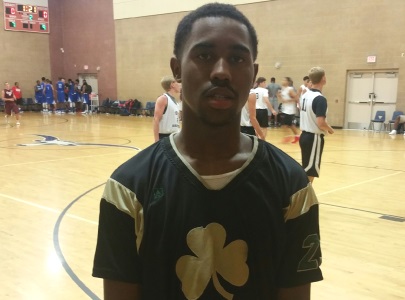 One of the elite overall players and top-rated college prospects in the state is a talented member of the state's 2019 class.  A class already loaded with some serious prospects for college coaches to begin taking a hard look at, Shadow Mountain High School's gifted 6-foot-1, 165-pound sophomore point guard  Jovan Blacksher is a unique talent that utilized this club season to break out from the pack of talented 2019 prospects.

Last high school season was the first season of high school basketball for Blacksher and a very successful one, as he helped lead the Matadors to another Division-II state title.  While only a mere freshman for a loaded Shadow Mountain team that also included then senior point guard Mike Bibby Jr. (University of South Florida signee) and 2019 point guard prospect Jaelen House, Blacksher still made his presence felt every night - providing immediate scoring support and an ability to run the team efficiently.

Last season as a freshman contributor on a state championship team, Blacksher averaged 6.5 points, 2.3 assists, 2.2 rebounds and an impressive 2.6 steals per/game, while helping Shadow Mountain to a 27-5 overall record on the season.  Shadow did not lose to an Arizona high school team last season.  Each of the program's five losses last season came at the heands of top-rated out-of-state high school programs.

This spring and summer was big for Blacksher who utilized the club season to showcase his superb skillsets, proving that he is a unique talent in the state of Arizona.  While Blacksher is a smaller point guard prospect, he is a unique talent in the state of Arizona - a highly skilled and talented point guard with an ability to make plays for himself and others almost at will and with flare.  This young man is fun to watch perform as he possesses a superb handle of the basketball, excellent court vision and body control, which allows for him to get into the lane when he wants to and make plays at a high level level.  He also possesses a nice shooting stroke with excellent range on his shot and a quick release - making him very difficult for opposing guards to defend.

Blacksher is a rare find in the state of Arizona, as he possesses a high level of self-confidence in his play, which rubbs off on his teammates and makes players around him much better.

This club season, Blacksher traveled with several different club programs throughout the club season.  He first played for the highly acclaimed Oakland Soldiers in the spring, then saw time with the Powerhouse Hoops program this summer, and then finished the club season with the talented I-10 Celtics in Vegas.

It will be very interesting to see who Blacksher plays for the next  two club seasons in his career, as any club team that can will be trying to land this gifted prospect.

While Blacksher still has not received an official division-I scholarship offer, that we know of, look for him to begin receiving offers quickly and often over time.  Such programs as Arizona State have already expressed serious interest in this young man, so offers could begin to pour in soon for him.

I really enjoy watching this young man perform, and will look forward to watching him compete over the next three years of high school.  Blacksher is a joy to watch play and already has proven that he is among the state's elite level talents.