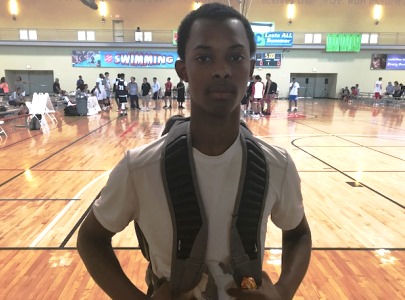 Liberty High School's ultra-athletic 6-foot-2 senior combo-guard Josh Ursery is a big-time athletic talent that has a bright future ahead of him, as a result of his tremendous ability to play above the rim with serious recovery and an extreme motor.  It has also been widely known that Ursery has had his troubles in the classroom.  As a result, Ursery realized his future early in the recruiting process, and now has decided on a junior college home for the future.

After mulling over his options for the future, Ursery has given a verbal commitment and will sign with Hutchinson Junior College (KS).  Hutchinson is regarded as one of the top junior college programs in the country, and recently won a national championship.  Former Shadow Mountain star performer and current Grand Canyon University guard prospect JJ Rhymes recently helped lead Hutch to a national title as a freshman at the school.

Ursery recently turned in top performances in the Arizona Preps Fall Showcase and also the AZ Finest Showcase - proving just how superb of an athletic talent that he is.  Ursery is a tremendous athletic talent with a very high motor and an ability to play at a very high level in the open floor.

Congratulations on this commitment by Ursery and the Liberty program on this accomplishment.  I believe Ursery has what it takes to be a pro one day, as a result of his superior athleticism and extreme stamina and motor.  He reminds me a lot of former Providence standout and current NBA and overseas guard Bryce Cotton.

Arizona Hoop Review Scouting Report:  Ursery has NBA athleticism for his size that allows him to finish plays well above the rim and over defenders. A big-time dunker in traffic and in the open floor - an excellent slasher and finisher.  A serious scorer with the ball in his hands, although he is the size of a point guard. Will need to embrace the point guard position to maximize his potential over time.  A good shooter with range on his shot, but is at his best off the dribble where he can make plays for himself and others.  An excellent slasher and finisher.  Great in the open floor.  A very good defender.  A good rebounder for his size.  An excellent sleeper prospect in the class with pro potential over time as he matures, if he will continue to work hard, on and off the floor.