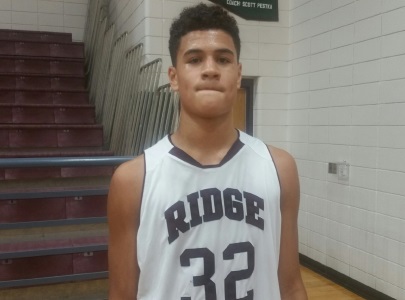 In caase you missed it, one of the state's elite young talents has changed schools.  Former Mountain Ridge High School 6-foot-5 sophomore wing Josh Green has made his decision to join his older brother, Jay Green, at Hillcrest Prep Academy where he will play this high school season (2016-2017) and look to complete his high school career.

A member of the loaded 2019 class, Josh Green is among the elite overall prospects in the state of Arizona, and is coming off a big freshman season for himself under head coach Eli Lopez.  Green averaged strong overall numbers as a freshman starter for Mountain Ridge last season - helping the team to a state playoff run and a 19-8 overall record on the season.  This season, Green will change directions - now attending a loaded Hillcrest Prep Academy program in Phoenix.

Green was regarded as the state's top overall freshman prospect a year ago when he entered the high school ranks, and has received loads of recruiting interest already as a result.  After his older brother Jay Green, a senior on last year's Mountain Ridge roster, decided to attend Hillcrest Prep for a post-graduate year (2016-2017) this season, the decision was easy for Josh to join his brother at the national program, where Josh will play for the school's national high school team - a team that features the nation's #1 overall 2017 prospect DeAndre Ayton and many other top-rated national prospects.

Currently, Green has offers on the table already from Utah State, San Francisco, UT-Martin and Prarie View A&M, and he is receiving serous recruiting interest from such programs as the University of Arizona and Wyoming, with many more schools already looking to get involved.

Many top-rated prospects around the country are now looking at national prep programs to attend for their high school careers - a pattern that started in the state of Arizona with Westwind Prep, while under the leadership of former head coaches Gary Trousdale and Jeff DeLaveaga.  The opportunity to play against nationally top-rated competition is luring and hard to pass up for top-rated basketball prospects who are often in pursuit of better competition and more national recruiting exposure.

Josh Green is another prospect to make the jump, but many more could follow in the future.

Arizona Preps will continue to follow the play and recruitment of Josh Green closely this high school season, and bring you any updates as they continue to develop.

Arizona Hoop Review Scouting Report:  Green is a high-level young athletic talent that possesses a live body and excellent body control in the open floor.  A very good slasher and finsher, Green is best while creating in the open floor and while slashing to the basket where he is an excellent finisher already.  He can finish either hand around the basket and also has a variety of floaters he uses when he faces bigger opposition in the paint.  A very good shooter with range, Green has worked hard to stretch his ability to extend the floor - making him difficult to defend for opposing players.  He still needs to become more consistent from longer ranges, but, as he develops physically over the next 3 years, he should become much more effective as a long-range threat - making him a big-time wing prospect.  An active rebounder and finisher that plays above the rim and is able to attack the basket with tenacity.  An excellent offensive rebounder.  Gets to the foul line quite often when he is in rhythm.  A very good on-the-ball defender that plays passing lanes and forces opponents to watch their passes, as he gets his hands on the basketball quite often.  Great in the open floor.  A good ball handler and passer but needs to continue to focus in these two areas of his game to maximize his potential as a college prospect.  A big time prospect for the future and among the elite prospects in Arizona's 2019 class.