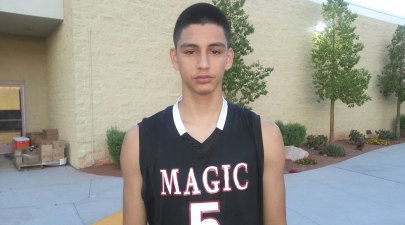 It soom time for him to figure things out, but this week, after waiting for some time, Maryvale High School's talented 6-foot-6 unsigned senior forward Jorge Cano has found a home.  After considering numerous college programs for his future, Cano signed this week with a local up-rising NAIA program, Benedictine College.

Benedictine College is officially located in Illinois, but is moving their operations to Arizona in the fall of 2014, and will competing in basketball in the fall of 2015.  Head coach Steve Schaffer will coach the program, while also holding Athletic Director responsibilities.

Last season was a coming-out-party for Cano, as he had a big junior season for a struggling Maryvale basketball program. While the team suffered their share of losses throughout the season, the play of Cano was a major bright spot for head coach Sebastion Payton.

Cano averaged a team-high in points and rebounds this season as a junior, and also averaged 19.2 points and 8.5 rebounds per/game two seasons ago as a junior – impressive numbers. He also racked up 2.5 blocks per/game – utilizing his extreme length to block and alter shots, while also guarding the opposing team’s best player in each game.

Cano saw his first real competition during the summer of 2013 while competing on the summer club circuit with the Arizona Magic Elite, and teaming up with such top-rated talent as Sunnyslope’s Michael Humphrey and Westview’s Andre Adams. Cano more than held his own – stepping his play up and proving that he has no fear against the top talent in the West. In fact, Cano grew up a great deal physically and mentally during the club season, and emerged into one of the top prospects in the 2014 class.

Cano's best years are well ahead of him as he is still developing as a nice talent with major upside.  Congratulations to Cano and his family on this amazing accomplishment.

Arizona Hoop Review Scouting Report:  Cano has serious length on his rangy body that suggests he is still growing a great deal. He has excellent versatility and is capable of guarding several positions on the floor. He is an active rebounder and shotblocker and is a good defender with good lateral quickness. Cano is a good ball handler and likes to handle the ball in the open floor. He is capable of scoring around the basket and also from the perimeter, where he has some range on his shot.  As he matures even more, you cannot help but try to imagine how Cano will look as a finished product, since his long arms look like that of a player much taller. Cano could grow to become 6-8 in height before he stops growing.  A nice overall talent with upside for the mid-major division-I level.