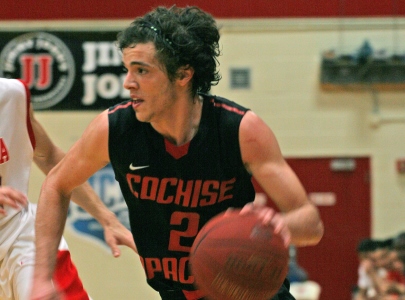 Martin was one of the ACCAC's top performers the past two seasons, and this season he put it all together for himself and Cochise.  Martin ranked among the top individual scorers in the conference this season - averaging 17.7 points per/game and 3.5 assists.

Recently, while I believed that he was definitely a division-I prospect, Martin decided to sign a national letter of intent with Hawaii-Pacific University - an absolute steal for a division-II program.  Martin actually received serious interest from such division-I schools as UTEP, while a senior at Millennium High School and playing club basketball during the spring of 2013.

Congratulations to Martin on his signing and good luck to him in the future.  I really enjoyed watching this young man play for the past several years - a relentless competitor with amazing work ethic and energy.

Arizona Hoop Review Scouting Report:  Martin is an electric guard prospect with maybe the best motor I have ever seen.  He runs continuously throughout the game and never seems to tire out - making him very difficult to defend for opposing guards.  Martin is excellent in transition and looks to push the basketball every chance he gets, and applies consistent pressure on transition defenses.  He is an excellent shooter with unlimited range on his shot and has a very quick release.  He is also capable of making shots from the standstill position on the floor or while on the move.  He is very crafty and has a nice overall skill level that makes him enjoyable to watch play.  Plays with an amazing attitude on the floor, and is a joy off the floor as well.  An excellent on-the-ball defender that also plays passing lanes consistently.   A very good ball handler and passer that is capable of playing both guard positions on the floor.  A mid-major division-I prospect.