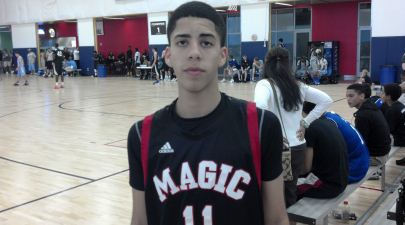 It was an unfortunate circumstance for talented and successful 5-foot-10 senior guard Jordan Howard.  After gaining serious college interest early on in his college recruitment, resulting in several scholarship offers, Howard would battle an ankle injury during his most important spring and summer (2013), and would eventully lose the interest he had earned a year before on the AAU/club circuit.  As a result, Howard would miss out on the opportunity to make his college decision this fall, alongside many of his friends, and have to elect to wait during the late signing period.

The wait for the talented guard prospect is now over as a college coach and friend of the family has risen too the occasion.  As a result, Howard has been given an opportunity and has decided to end his college recruitment.

Recently, former Grand Canyon University (GCU) head coach Russ Pennell was hired as the new head coach at the University of Central Arkansas.  Pennell, who also formerly coached many Arizona prospects at one time with the Arizona Premier Basketball Club, has many relationships in the valley, and his relationship with the Howard family is immense.  Jordan's father, Chuck Howard, worked as the strength and conditioning coach for Pennell's teams at GCU.

This weekend, after Pennell extend a scholarship offer to Jordan Howard, the talented guard prospect accepted the invitation - going with what he knows rather than waiting for the spring evaluation period to raise his college recruitment.

Howard is coming off an excellent season for himself, although in a much different role and capacity as his junior season.  After a stellar junior season where Howard torched the state and put up ridiculous numbers, this season was much different for Howard.  As a junior last season, Howard had his best high school season to date and also became one of the state’s elite performers - averaging an eye-popping 25.6 points per/game and being selected among the 2013 Arizona Preps All-Arizona Team, and also as one of our runner-ups for our Arizona Preps Player of the Year.

This season, while playing alongside his younger brother and budding star basketball prospect Markus Howard, Jordan sacrificed his numbers and even himself in some respects to make room in the backcourt for Markus.  The Howard brothers were extremely successful though, and led Perry HS to a 26-6 overall record on the season and a Division-I state semi-final finish - before losing to eventual state champion, Corona Del Sol HS.

Jordan Howard averaged 15.9 points and 2.9 assists per/game this season - modest numbers compared to his junior season at the school.

Howard burst onto the recruiting scene during the spring of his sophomore season (2012) after a strong performance on the AAU/club circuit with a then, loaded Arizona Magic 16U ballclub that would win the 16 & Under tournament championship at a major Double Pump event in California.  Howard would then also continue his strong play throughout the summer, and then also come back with a monster junior season performance, which would earn him several division-I scholarship offers, as a result.

Howard competed on the spring and summer club circuit last club season with a talented and newly developed Arizona Power Black 17U team, that would fair well on the club circuit.  While Howard would play well when healthy, he would also injure his ankle in the spring, which would cause him some struggles on the basketball court.

Howard is a pure-point guard prospect and a floor general with an excellent handle of the basketball and a strong feel for the game.  He makes players around him better and enjoys setting up his teammates for scoring opportunities – a terrific attribute for a point guard prospect.

Congratulations to Jordan and the Howard family on this amazing accomplishment and a terrific high school career from our staff here at Arizona Preps.

Arizona Hoop Review Scouting Report:  Howard is a pure-point guard prospect and a floor general with an excellent handle of the basketball and a strong feel for the game.  He makes players around him better and enjoys setting up his teammates for scoring opportunities – a terrific attribute for a point guard prospect.  He sees the floor very well off the dribble and is able to make passes while in motion to the open man on the floor, while also being able to score the basketball effectively and efficiently when he feels he needs to.  Jordan is an excellent penetrator and loves to have the basketball in his hands, which makes him difficult to defend one-one-one, as a result of his herky-jerky movement off the dribble.  He has a nice shooting stroke with excellent range on his shot, and also has a very quick release – allowing him to get his shot off quite well.  Also capable of scoring off the dribble and in the lane over bigger defenders, which he uses a variety of floaters to make plays in the lane.  Also a good defender with good lateral quickness.  He is able to turn his man, while also playing passing lanes and creating deflections.  As Howard continues to mature physically, he will need to add more size to his small frame to absorb contact from bigger defenders at the collegiate level.  Natural physical maturity will allow him to reach his maximum potential as a player.  A nice looking point guard prospect that can score or playmake.  Has an excellent smile and a great attitude on and off the floor.