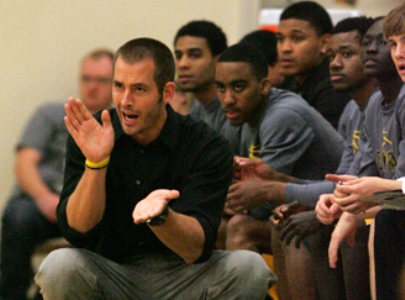 After leading Central Arizona Junior College to this year's league championship in the Arizona Community College Athletic Conference (ACCAC), posting an impressive 30-5 overall record on the season and being selected as this year's ACCAC Coach of the Year, Central Arizona JC head coach Jordan Dreiling has been introduced as the new head coach of Midland Junior College (TX).

Dreiling joined the coaching staff at Southeastern Oklahoma State University (SEOSU) in Durant (NCAA Division-II) where he also played for two seasons.  At SEOSU, Dreiling served as an assistant coach for five seasons. He helped guide the Savage Storm to a #4 national ranking, a 27-5 overall record and a Sweet 16 appearance in the NCAA Division-II playoffs.

Dreiling left SEOSU in 2010 to become an assistant coach at Central Arizona College.  He became the head coach at CAC in 2011 and guided the Vaqueros to their best-ever record in 2013, finishing the season with a 30-5 overall record, including a 20-2 conference record.  Coach Dreiling and the Vaqueros advanced to the Elite Eight at the 2013 NJCAA Men’s Division-I Basketball Championships.  His current collegiate coaching record is 50-15 (.769).

Dreiling was named ACCAC Coach of the Year, District-1 in 2012-13, after leading CAC to their first-ever conference and district championships.

Good luck to Jordan Dreiling in his future at Midland JC, and we will look forward to seeing who will take over the Central Arizona JC basketball program - one of the best jobs in the ACCAC.