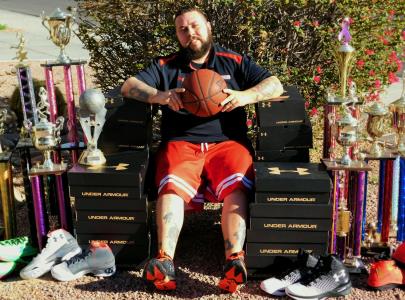 It is now time for the very busy and exciting club basketball season in the state of Arizona.  As we now prepare to kick off the spring evaluation period for college coaches around the country and also players all over the country, let's take a hard look at one person that has and continues to change the game in Arizona.

There have been many people over the years that have made significant impacts to the game of basketball in the state, but Trevor Browne High School graduate John Ortega is quickly putting himself in a world all of his own.

"It's not about the players for me," said Ortega.  "It is really about the coaches that have defined me."

One glaring fact about John Ortega is that he is a pure product of Arizona high school basketball.  In a rich basketball tradition in the state, atleast for those that truly understand it, Ortega has been around the game in this state all of his life.  Like him or love him, Ortega exemplifies where our state has come from, and where it is heading.

"I came from a group of great coaches," said Ortega.  "You have to remember - at Trevor Browne, we had one of the greatest group of coaches at the school at one time.  Mike Ellsworth was our head coach (long-time high school coach in Arizona) and Brad Pinter (long-time Arizona high school head coach) was his assistant.  David Grace was our junior varsity coach (UCLA assistant coach) and Paul Long (long-time high school head coach in Arizona) was the freshman coach.  They were all on the staff.  I learned from the best.  It was the best coaching staff in Arizona history."

In today's Arizona basketball community where new and different people are now consistently getting involved, Ortega represents a long history of Arizona basketball that has come a very long way over the past 20 years.  In an interview, Ortega shared with me many great stories about his time at Trevor Browne High School as a player.

"I got a lot of knowledge from Mike Ellsworth," said Ortega.  "I wanted to be around him as much as I could.  People didn't realize why I spent so much time with Mike.  He developed me.  I have never had a bad coach."

Through the rich coaching tradition at his high school, Ortega grew to become a coach and started coaching in 1998, when he became an assistant coach for Brad Pinter (head coach) at Camelback High School.

"Our first year at Camelback was a tough year," said Ortega.  "In year two I learned how to build a program."

Ortega would then get his first high school club coaching experience, as he would coach a 14U team for the Arizona Stars.

"With the Stars and under Pinter, I learned how to recruit," said Ortega.

Ortega would work hard to defeat the then top 14U team in the state, coached by then Arizona Stars Club Director Jon Perryman.  After a couple years of losing to Perryman's team, Ortega would finally overcome his nemesis, before his players would get absorbed by an older and more talented Stars team - for the purpose of keeping the Arizona Stars organization strong.

It became frustrating for Ortega to keep losing his players to other teams in the organization, so he would then develop his own program in 2001, the Arizona Saints.  With the Saints, Ortega developed and coached some good Arizona basketball talent, including University of Portland signee TJ Campbell, who would first attend Glendale Community College before signing in the WCC Conference.

"We were winning a ton of games, but I learned a lot," said Ortega.  "I learned that coaching the best kids in the state didn't mean anything if I couldn't get kids off the board - getting them recruited.  After all of the trophies and all the wins, kids weren't getting scholarships."

"He told me that you have to forget about winning basketball games - you have to prepare these kids to win in life," said Ortega.

Ortega would learn that no matter how many games he won, the true purpose was to help kids reach the next level and further their basketball careers.

"I had to put my ego aside," said Ortega.  "I felt like I failed those kids (with the Saints)."

Ortega would then go back to coaching at the youth level again for 3 1/2 years to develop as a coach, and to reorganize.  In 2013, Ortega started running camps and tournaments with Dinos Trigonis (Pangos All-American Camp) in California, and also for Chad Groth (Area Codes Basketball), and numerous other people - getting his name out there again, and staying involved with players.

Ortega would then become an assistant coach at Desert Mountain High School where he would coach his first top prospect in years, Rolando Rhymes.  It was the start of a new era for Ortega, as he would then help develop a club program with Inspire Courts known as The Thunderbirds - a team comprised of many of the state's top players at the time - Roland0 Rhymes, Ryan Richardson (Weber State), Chris Davis and Kodi Justice (Arizona State).

After a very successful tenure with The Thunderbirds, Ortega would still lose his top prospect, Kodi Justice to the Compton Magic.

"That's when I realized that we needed a name to compete, and keep the top players home," said Ortega.

After merging with highly successful Texas-native and club coach Max Ivany, and starting the Arizona D-I Ambassadors, Ortega would get a call from a new East Valley-based trainer, Sundance Wicks.

According Ortega, Wicks called him and said, "I know some serious dudes, that say you are a serious dude."

Together with Wicks, Ortega would bring together some of the top talent in the state.  Combined with the financial resources from local philanthropists Tim Benson and Doug Founies, the high-powered group would develop a new club program in the state, designed to develop athletes through skill training, while providing maximum exposure.  They would call it the Arizona Power.

"We were told by Tim and Doug that they were developing a brand that they could grow and sustain after they were gone," said Ortega.

"I was now able to get players off the board, and at a high level," said Ortega.

Amidst much surprise, the program would disband in 2016, based on several disagreements between management of the organization.  As a result, Ortega and close friend Jeff Becker would leave the Power organization and develop their own and new program, Powerhouse Hoops.

In their first year, the program would organize a great deal - building a program from the ground up and into one of the top programs in the West.  Almost overnight, the program would become a major player - joining the forces of Southern California basketball scout, club organizer and tournament director, Ryan Silver.  With strong support from Silver and the Under Armour shoe brand, Powerhouse Hoops would grow to great proportions in their first year.

The Powerhouse Hoops program would quickly develop, led by the play of their 17U Black squad, which was led by the play of Saben Lee (Vanderbilt University signee).  The team would fair very well in the spring of 2016, as several players in the program would begin getting recruited at the same level as the previous Power program - suggesting the strength of the Ortega brand.

The Powerhouse Hoops organization now has 55 different club teams within their organization, comprised of (3) different states (Arizona, New Mexico and Minnesota), and is still growing.

What will Ortega do next?

"After 19 years of coaching and work, I'm still waiting for that shoe deal," said Ortega.

According to Ortega, there are some great things still ahead for him and the Powerhouse Hoops organization, but he is solely focused on improving Arizona basketball.

"It's all about Arizona basketball," said Ortega.  "I have been in it for a long time.  I want to give our state a program that can compete against the top programs in the country."

Ortega has come a long way in his pursuit, and I am definitely looking forward to seeing what he does next.