John Mattingly Has A Bright Future 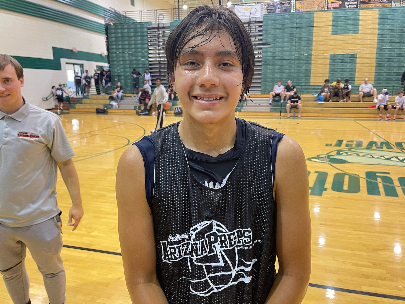 Another one of the elite young prospects in the state of Arizona is a member of the 2026 Class - rising 5-foot-11 8th grader John Mattingly. Mattingly is one of the premier middle school prospects in the state and one to definitely watch for the future. Mattingly has made a lot of noise within the Arizona basketball community as a result of his exploits on the basketball court. After observing Mattingly and his ability to play the game, here are some reasons why I believe this young man's future to be extremely bright in Arizona basketball.

Mattingly has built a nice reputation for himself as a young prospect to be one of the elite overall talents in the state. While playing for his club program, the Monstarz, Mattingly has led the club program to numerous club tournament championships, and many strong finishes against the top talent in the country. In the process, it is glaringly obvious that this young man is at the top of the 2026 Class, among top-rated young prospects to watch in the future. Mattingly has played up at older age groups throughout his life and has competed at a very high level, regardless of his competition.

I had the opportunity to observe Mattingly recently in the Arizona Preps Big Baller Brand Regional Camp held in Arizona, and was very impressed with his ability to handle the basketball, create and make shots with range and run a team from the point guard position. This young man has a high skill level and makes the game look easy, as he has command-presence on the basketball court with the basketball in his hands. It is obvious to see the high level of confidence that he plays with, and also his ability to make players around him better, as a result of his high basketball IQ on the floor. He is a pure shooter of the basketball with excellent range on his shot, which makes defenders have to respect him from longer ranges, which open up his ability to create plays off the dribble. Mattingly makes very good decisions with the basketball and is well beyond his years as a young player.

It is possible and looks like Mattingly will attend Brophy Prep for his high school career in the state, which will give the Brophy Prep program a star for the future for sure. Mattingly is a winner that has won a great deal throughout his life, and so his future is very bright and he will make an immediate impact in the state's high school ranks very soon, after an another year of middle school basketball for himself, where he will continue to torch the nets for another season.