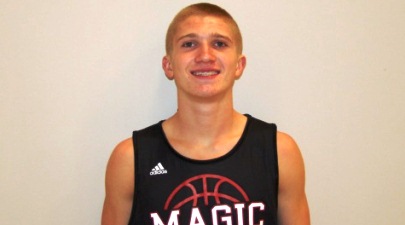 Westwind Prep 6-foot-1 senior point guard John Marshall, a recent transfer from Desert Vista High School, is now off the recruiting board, as the tough, hard-working and hard-nosed point man has given a verbal pledge to a program in the Big Sky Conference.

While on an official recruiting visit this weekend to the University of Southern Utah, Marshall enjoyed his trip enough to end his college recruitment - giving a verbal commitment to new head coach Nick Robinson and his men's basketball staff.

Marshall becomes only the second Arizona 2013 prospect to give such a commitment to a division-I program - a major honor for a kid that many critics had believed would not reach the division-I level when he was much younger.

Arizona's top-rated pure point guard prospect in the 2013 class, Marshall turned in a strong spring and summer showing for himself this off-season, where he proved that he is among the best pure-point guard prospects in the West.  A tough and heady point man, Marshall competes as hard as any player I have ever seen and demonstrates extreme toughness and grit on and off the basketball court.  Marshall possesses excellent work ethic and has worked tirelessly throughout his basketball career to become a serious college prospect.

Marshall also made a big move for himself this summer, when he decided to transfer schools - leaving Desert Vista High School and making the move to play for Westwind Prep's national high school program, coached by Jeff de Laveaga.  Marshall helped lead his Desert Vista HS team to a 22-9 overall record during the 2011-2012 season and a Division-I semi-final finish.

This is a tremendous honor for a student-athlete in the state of Arizona that exemplifies hard work and dedication to his craft.  In my 17 years of scouting boy's basketball in the state, I have not seen a player that works harder on or off the court than Marshall, so this accomplishment is the product of sheer hard work for a young man that never quits.

Congratulations to the Marshall family on this honor, and good luck to John on his future in the Big Sky Conference.

Arizona Hoop Review Scouting Report: Marshall's extreme toughness on the defensive end and ability to get into the lane and finish makes his team go, and also makes him tough to defend off the dribble.  Marshall is a quality point-man that also sees the floor very well and likes to push the basketball up the floor as much as possible.  His confidence while running a team is glaring, and he takes pride in making players around him better.  A selfless guard prospect, Marshall is an excellent leader that is very vocal on the floor.  He is a throw-back point guard that looks to pass first and shoot second, while excelling on the defensive end of the floor.  Has improved his perimeter shooting a great deal over the past several years, but still needs to become more consistent from longer ranges to become much more of a scoring threat for himself.  This young man's excellent leadership and attitude on the floor are contagious.  A solid prospect in every way and a born leader and winner.