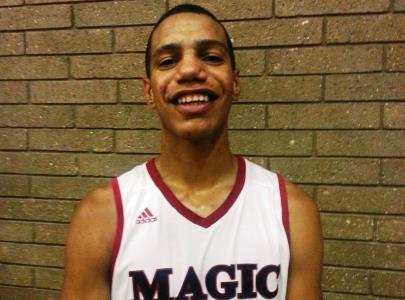 Another underrated prospect in Arizona's loaded 2014 senior class is now officially off the recruiting board, as Grand Canyon High School's athletic and developing 6-foot-5, 195-pound senior forward Joey Bankston has made his college decision.  In an continue his development as a college prospect, Bankston has decided to take his college future to southern Arizona where he will suit up for a top-rated local junior college basketball program.

Grand Canyon High School is coming off a strong 2013-2014 high school basketball season, reaching the state playoffs and finishing with a 23-9 overall record on the season.  While Grand Canyon would fall short of reaching the state finals, losing to Scottsdale Prep in the state quarterfinals, they would receive a terrific season from their top overall prospect in the program – Joey Bankston.  Bankston would carry his team on his back this high school season – leading the team in numerous statistical categories.  Bankston would average very impressive numbers on the season – pouring in a team-high 22.6 points and 13.2 rebounds per/game, while shooting 55% from the field.

For his tremendous accomplishments on and off the basketball court this season, Bankston was selected as the Division-IV Player of the Year for the 2013-2014 season – receiving the selection as the division’s top performing student-athlete.

Bankston has developed into one of the state’s top overall prospects over the past several years.  A native of Toledo, Ohio, where he lived until moving to the state of Arizona, Bankston had very humble beginnings growing up.  While being raised by a single mother, Bankston came from the streets of Ohio as a youngster to develop into the young man he is today.  Bankston has worked really hard on his game and in the classroom to become a nice young prospect, that doesn’t take life for granted.

Bankston  is among the state’s top young talents, and his athletic talent as a college prospect is glaring.  This young man is among the most athletically gifted players in the state, as he has a serious motor and makes plays most his size cannot.  He plays well above the rim when he attacks the basket and has great lift off the floor.  Still developing his perimeter skills to reach his full potential as a player, Bankston is now working very hard on his fundamental approach to the game to increase his ability for the collegiate level.

Congratulations to Bankston and his wonderful family on this accomplishment from our staff here at Arizona Preps.  Bankston is the pride of Northern Arizona, and should develop a great deal under the leadership of the CAC basketball program - landing himself another nice opportunitiy after a stint at the collegiate program.