Jimmy Bell Blows Up During Summer 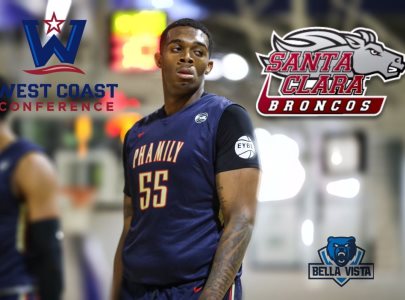 Another prospect that maximized his opportunities this summer during the NCAA evaluation period was Bella Vista Prep's 7-foot, 290-pound senior post Jimmy Bell.  A native of Saginaw, Michigan, Bell has worked tirelessly over the past year to transform his body and his game in an attempt to raise his recruiting stock.  This summer the serious hard work paid off for Bell, as he reeled in numerous scholarship offers for himself, and now looks to be in excellent shape heading into the fall signing period.

Bell was once more of a football prospect, as he grew up loving the sport and becoming a serious football prospect for the future.  But his love for the game of basketball kept him working just as hard on the basketball court as  the gridiron.  After picking up the game of basketball during his freshman season in high school, and outgrowing the sport of football, Bell realized that he needed to slim down physically to maximize his potential a a player.

Give Bell a focus and he becomes focused.  Over the past year the gifted post prospect would overcome major adversity in his life, and develop a serious level of discipline for himself.  Bell would lose close to 100 pounds in six months after committing himself to a diet and training program that would include major cardio workouts, hiking, biking and basketball workouts.

As a result of Bell's new commitment to his body and his game, Bell would see his college recruitment blow up this spring and summer, as he hit the club circuit with the Oakland Soldiers and The Phamily on the Nike EYBL circuit.  Bell would raise many eyebrows with his sheer size and mobility, and would earn numerous scholarship offers for himself.

This fall, Bell will have a major decision to make for himself as he has numerous nice offers on the table for himself.  Bell has offers from such schools as Iowa State, Texas Tech, UNLV, Loyola Marymount, Santa Clara, Southern Illinois, Tulsa, Oakland, IUPUI, UT-Martin, Southern Utah and Oakland.

Currently, Bell has not indicated any clear leaders in his college recruitment, so he will have a big decision to make for himself this fall, but he has a nice list of college programs to choose from for himself, as a result of his tremendous hard work and dedication to his body and his craft.

Bell will also anchor an absolutely loaded program this season at Bella Vista Prep, as the program returns a loaded group of college prospects from last season, and has added numerous other top-rated performers to the program.  Last season, Bell averaged 15 points and 12 rebounds for head coach and program director Kyle Weaver, while playing a national schedule against some of the nations top prep school talent on the Grind Session.

I will continue to follow Bell's recruitment closely, and bring you any recruiting updates as they continue to develop.

Arizona Hoop Review Scouting Report:  Bell is an absolute force in the paint and around the basket.  After losing loads of weight for himself and refining his approach to the game, Bell had a very strong spring and summer performance for himself, and, as a result, he earned numerous offers for himself.  Bell is a true wide-body post prospect with amazing size already for the collegiate level.  He has a nice overall skillset and knows how to play the game, and is a good low-post offensive talent that scores effectively with his back to the basket.  Also able to face up to the basket and make moves either direction and finish strong around the rim.  A strong finisher around the basket.  Runs the floor well.  A strong rebounder and a good shot blocker.  A good passer out of the low post.  His added fitness to his once large frame, has improved his ability to play the game a great deal.  A nice sleeper prospect that will only gain much more recruiting interest as time develops.