Jeylynn Fields Among Top Sleepers In The State 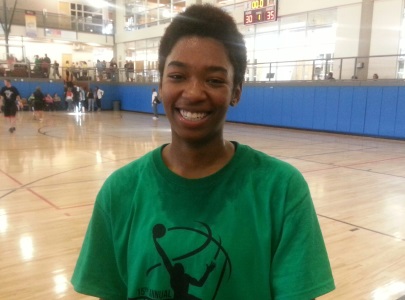 After putting up impressive overall numbers last high school season and while being a relatively unknown prospect in the state, Field showcased her basketball talents in this year's Fall Showcase - leading her team to two big wins in the event.

Last season, on a team that finished with a 7-19 overall record on the season, Fields averaged a team-high 15.3 points, 4 assists, 10.6 rebounds and 3.3 steals per/contest.  While her team struggled to win ball games, Fields was excellent and carried her team in a rebuilding year.

Fields is among the most underrated prospects in the state, and her coach believes that she deserves an opportunity to play at the next level and for a good college program.

"She has been through a lot," said Casa Grande HS head coach Ursula Doll.  "Jay had to overcome a lot to get to this point, so she deserves anything that comes her way."

Fields is a big-time talent that is very skilled and has very good overall toughness as a player.  She is a heady point guard prospect that is capable of playing both guard positions on the floor, as a result of her ability to handle the basketball and make plays off the dribble for herself or others.  She is a deadly penetrator with the basketball in her hands, and is capable of scoring the basketball at a high rate.  She is best off the dribble when she can put pressure on opposing defenses and get into the lane.  She is a good finisher and also has a nice mid-range game for herself.

Fields is a good shooter with range on her shot, which makes her tough to defend off the dribble.  She is an excellent ball handler and passer and sees the floor very well.  Her best attribute is her ability to defend opposing guards, and her overall toughness as a player on the basketball court.  She has superior quickness and her quick feet allow her to be very active on the floor.  She is also an excellent rebounder for her size - possibly the best rebounding guard in the state.

Fields will look to lead a Casa Grande HS team this season that should see major improvement in the Division-II Class from a year ago.

Head Coach Ursula Doll, also club President and founder of the Arizona Reign club program, has worked very hard, year round, to develop her girls at Casa Grande.  Doll is very intense on and off the floor and also teaches and coaches girls volleyball at the school.  Doll's ability to develop and prepare her girls, while also displaying an affection for the game that is rarely found has transformed the girl's basketball program for the Cougars.  "Jay" Fields is just the first top-rated prospect that she will develop.

Look for Jay Fields to make a significant jump in our next girl's player rankings.