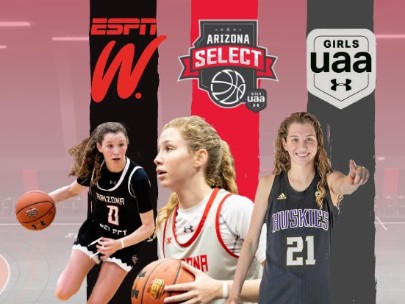 Rarely are top-rated Arizona basketball prospects given the honor of being recognized by national media, boys or girls. Being ranked among the top prospects in the country is one honor every top prospect strives for. Recently, ESPN released their 2021 HoopGurlz Recruiting Rankings for the ESPN Women's Top 100. With (4) different Arizona girls prospects making the cut, one new prospect to make the list of Top 100 prospects is Chaparral High School's talented 5-foot-10 senior guard Jess Finney (University of Washington commit).

Finney is a unique prospect on the basketball court, so it is only fair that she be rated among the nation's elite girl's basketball prospects. She is a bigger guard prospect with an excellent feel for the game, has a superb handle of the basketball and sees plays before they happen, while also being able to shoot the basketball with unlimited range on her shot and also make plays off the dribble. She simply does it all as a player, and has already given a verbal commitment to the University of Washington, and will play in the PAC-12 Conference in 2021.

Last season, Finney averaged very impressive all-around numbers - pouring in 21.8 points, 4.1 assists, 6.4 rebounds, 3.8 steals and 1.5 blocks per/game. While the team only finished with a 16-14 overall record last season in the 6A Division, Finney did all she could to lead her team. Chaparral got hot late last season, winning (3) games in a row heading into the 6A State Playoffs, but would run into a very talented Hamilton HS team in the state quarterfinals.

Finney is a big-time talent with loads of potential for the future. As she continues to mature physically, she will only continue to improve and develop a great deal, as she has an excellent feel for the game and a high overall skill level. She has the potential to have an excellent college career, and as she realizes her full potential as a player, she should blossom.

University of Washington Head Coach Jody Wynn and her basketball staff have done an excellent job of recruiting Arizona, and should be proud to land both Finney and Marisa Davis from the state of Arizona, both Top 100 prospects in America's 2021 Class.

Congratulations to Finney on her amazing accomplishment from our Arizona Preps' staff.