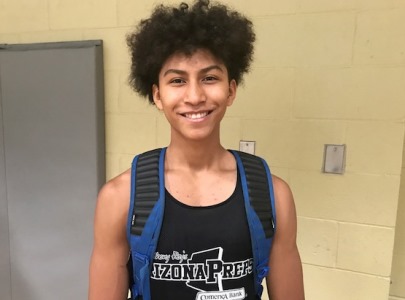 Hillcrest Prep's talented 6-foot-4 rising junior guard Jeron Artest is coming off a very good spring performance for himself, after a strong season, while playing for a loaded prep program that had a lot of success.  As a result, Artest has seen his college recruitment begin to seriously take shape.  On Saturday afternoon, Artest received a huge offer from a Big-East program.

While already possessing an offer from the University of Wyoming, Artest has seen his college recruitment expand a great deal after receiving an offer this weekend from St. John's University.  The son of former NBA star Ron Artest, who starred at St. John's, the offer from the Redstorm is tremendous for Jeron and the Artest family.  While it is still early in Artest's college recruitment, the offer from St. John's should be very hard for him and his family to pass up.

Before the start to the high school season, Artest decided to reclassify, becoming a member of the 2020 class.  Artest was young for the 2019 class, so the transition will and already has benefited him nicely.

Artest is a bigger guard prospect that is capable of playing both guard positions on the floor, but he is at his best from the point guard position as a result of his strong handle of the basketball, excellent feel for the game and a unique ability to see the floor and find the open man.  He has a nice body with superb physical strength and improved athleticism.

I first saw Artest in last summer's Southwest All-American Camp, where he was among the top overall performers in the event.  Artest is set to participate again in this month's second installment of the camp, and will look to showcase his improved play and ability to play the game.  I look forward to watching Artest compete against the camp's loaded field of talent later this month, as he is an absolute joy to watch play.

I will continue to follow Artest this summer closely, as he has become one of the state's hottest prospects.  Another top-rated prospect for the loaded Hillcrest Prep program.

Arizona Hoop Review Scouting Report:  Artest has grown a great deal physically over the past year - adding some very good size and strength to his frame and looking much more cut and athletic.  A very intriguing prospect that has an excellent feel for the game and an advanced overall skillet, that allows him to make plays for himself and others off the dribble.  He sees the floor very well and sees plays before they happen.  Has a high basketball IQ.  Has an excellent handle of the basketball.  A very good shooter with range on his shot and also a nice mid-range game as well.  An excellent defender that plays passing lanes and has very good toughness as a player.  The son of former NBA star player Ron Artest.  A player/prospect on the rise.