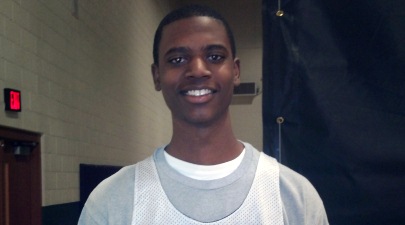 Post players take time to develop, and so patience becomes a virtue in preparation for the time it takes to develop a rising post talent.  One prospect that has developed as of late is Westwind Prep's 7-foot prep post Jeremiah April.  April is coming off a couple of strong performances against top-rated junior college talent in the state.

April has come a long way for himself after helping lead his high school program to an impressive 32-2 overall record on the season, and a Division-IV state championship last season.  April would however put up modest numbers for the smaller school level - averaging a mere 9.2 points, 6.8 rebound and 3.4 blocks per/game.

Westwind Prep's hard-working coaching staff of Jai Steadman and Nick Weaver can also be credited for developing April, as well as each of the other players in the program.  April has now become a serious recruiting target by many college programs around the country.

There are not many prospects with April's sheer size and length, as well as such a glaring upside for the future.  While the 2014 class in the West does not possess many taller post players with skills, Westwind Prep has two in April and 6-foot-11 prep post Kingsley Okoroh.  The two post players competing with each other every day has helped to develop both prospects.

Washington State and University of Detroit now look to be in hot pursuit of April, while many mid-major plus division-I college programs are now also expressing interest in the post prospect, so look for this young man to become one of the more sought after recruiting targets in the spring.