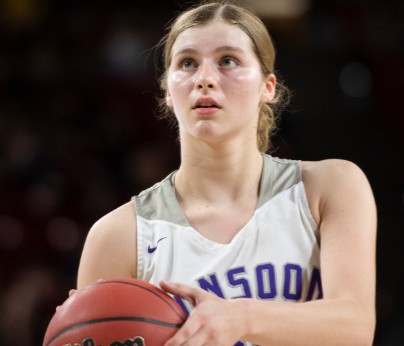 We have now spoken about many of the top girls prospects in the state of Arizona, and here is another one that is making serious noise nationally with high-major Division-I college programs across the country. Valley Vista High School's gifted 5-foot-11 junior guard/forward Jennah Isai is on the rise nationally. Currently rated among the nation's Top 50 girls prospect, Isai is now generating loads of college interest for herself, as she begins her junior season.

Isai is a different prospect with size, an advanced skillset and an aggressive playing style that simply makes her look different than her opposition. She is a unique looking prospect, and backs it up with a flat out ability to ball.

Isai is currently rated by ESPN among the elite prospects in America's 2022 Class, as she currently checks in at #54 overall in the rankings. Isai joins fellow 2022 classmate and club teammate Kennedy Basham on the list. Basham is current rated among the Top 30 prospects nationally (#31) by ESPN.

Isai is already blowing up in her college recruitment - receiving Division-I offers already from such college programs as Arizona, Michigan, Oregon, UCLA, LSU, Florida, Texas, Georgetown, Cal, St. John's, Texas Tech, Georgia, Colorado, UNLV, BYU, Mississippi State, Cal State Fullerton and Columbia. This is a very attractive list of women's college programs for a junior prospect, and she is just getting started, as she is set to have a huge junior season for herself. Isai should become one of the most decorated girl's basketball prospects in the history of the state of Arizona over time.

Recently, she was selected to participate in the McDonald's Evaluation Event for the Top 150 girls prospects in the country - a tremendous honor for her and an opportunity to raise her recruiting stock even more.

Isai currently splits her time with two different club programs, as she played for the Arizona Select this summer, while also playing for the Cal Stars (CA). She had a strong showing on the club circuit, while also playing exceptionally well in numerous exposure events. She also looked to transfer to AZ Compass Prep and join a loaded prep program, but decided to return for her junior season at Valley Vista.

Isai will now get back to business with her Valley Vista High School basketball program, after suffering a knee injury last season that caused her to miss much of the season. She still wass able to help lead her dominant girl's basketball program to a big 6A State Championship last high school season, and a 28-3 overall record on the season. Isai will again team up with 6-foot-1 senior forward Marisa Davis (University of Washington commit) this season to make the Valley Vista the most talented team in the state, regardless of division.

"She has the it factor," said terrific Valley Vista High School Head Coach Rachel Matakas. "She has a high level of play and is extremely competitive. She does not care who is on her team - she just likes to compete."

Jennah Isai is a special prospect, as she is very skilled with excellent size on her frame - able to play as a guard or forward with excellent versatility. She has an advanced skillset that allows her to play as a guard or forward, and is able to make shots from the standstill position on the court, or off the dribble, on the move. She is a very good shooter of the basketball with excellent range on her shot and a quick release. She is also able to create for herself and others off the dribble at a high rate, and is shifty off the dribble - changing directions nicely and finishing at the basket, around and over defenders.

Jennah can play inside and out, which will benefit her nicely over time, especially in the collegiate ranks. She has the game and skillset that suggests that she will become a pro over time, with continued focus and hard work. She is a strong rebounder and also competes hard. She is also a terrific passer, that passes the ball with either hand, and sees the floor well. Her versatility makes her difficult to defend, and helps her makes teammates around her better.

I will continue to follow the recruitment and progress of Jennah Isai closely during her junior season, and bring you any updates as they continue to develop. She is a special talent in the state and a prospect on the rise nationally.