Jeff McCain Proving Himself On Circuit 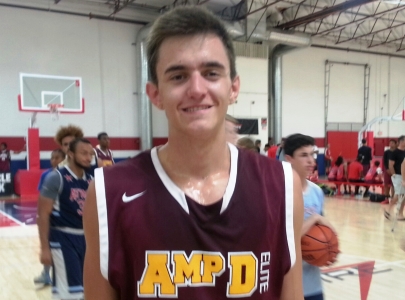 One of the better prospects in Arizona's 2016 class is a player that was very seldom utilized last high school season.  Corona Del Sol High School's 6-foot-4 rising senior wing Jeff McCain has won three-consecutive state basketball titles as an Aztec, but has yet to see any major playing time during the high school season.  As a result, McCain has utilized this club season to raise his level of play and prove that he is a player.

McCain spent a lot of time on the bench last season for Corona head coach Sam Duane Jr., while such stars as Alex Barcello, Marvin Bagley Jr. and Dane Kuiper carried the Aztecs all season.  I look for McCain to spend much more time on the basketball court as a senior for new first-year head coach Neil MacDonald next season, and become one of the state's most improved players.

This club season, McCain has proved that he is a player and has been one of the better surprise performers in the state this club season.  While playing for the Amp'D Elite club team, a team coached by former NFL superstar Amp Lee, McCain has proven that he is a serious college basketball prospect with nice versatility and a high motor.  He has superior athleticism for his size and a nice  overall skill level that makes him a very intriguing prospect.

McCain and his club team will travel this summer to several West Coast events, and I look for him to raise some eyebrows with his play - especially if the right college program is paying attention.  The Amp'd Elite team has had a very good performance throughout the club season and is loaded with talent, so they could definitely make some noise this club season.

I will definitely be paying close attention to McCain's play this summer, as he has become one of the better sleeper prospects in the state's 2016 class.