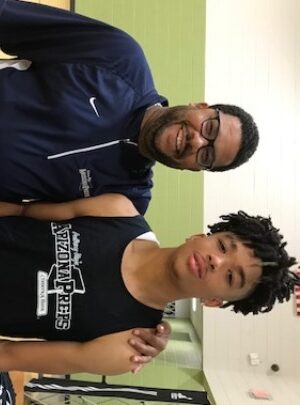 After traveling to the Arizona Preps Fall Showcase as a mere 7th grader in 2012 from Chicago, Illinois, talented 6-foot-3, 185-pound senior guard Jaylin Fleming, now of Arcadia High School, returned to this year's event to complete the journey.  Like he did as a mere youngster, Fleming returned to action in this year's event and impressed scouts in attendance with his superior strength and ability to attack the basket and finish strong at the rim.

While we have had other prospects play in the Arizona Preps Fall Showcase from such a young age and participate throughout their high school careers, Fleming is a much different case.  When Fleming traveled to the state of Arizona as a 7th grader, he was regarded nationally as the top overall prospect in America's 2018 class.  As a youth in the south side of Chicago, Fleming developed an ability to become a wizard with the basketball in his hands at a very young age - making guest appearances on such top-rated talk shows as The George Lopez Show.  Fleming was regarded as the nation's top prospect in his class for several years.  As a result of his youthful exploits, he received serious national attention by the nation's elite basketball scouts, and also was one of the nation's most viewed prospects on You Tube - receiving millions of views worldwide.

After developing his game at Mount Carmel High School in Illinois for two full seasons, Fleming and his father John Fleming decided to make the move to the state of Arizona.  After things did not work out successfully at Hillcrest Prep, Fleming found himself at Arcadia High School - a major cultural change for himself on the West Coast.  As a result, Fleming has had to change his mindset from playing for a national high school team to playing for a local high school team without a national schedule.

Fleming had a good junior season for himself, despite everything that he and his family went through - adjusting to a new culture, community, school and having to completely make new friends for himself during the most important time of his life.  He would help lead his program to a strong season, despite a narrow upset loss to Liberty HS in the state playoffs at home.

This season, Fleming is set to have a big senior and final season - something he has worked hard for all of his life.  And it will be a big one for him, as Fleming will be the first person in his family to go to college!  After his father, John Fleming, advised me of this fact, it brought tears to my eyes.  An entire family of people that have not had an opportunity to go to college - for basketball or any sport for that matter.  Simply to obtain a college education.

Last season as a junior, Fleming averaged 10.3 points, 5 assists and 4 rebounds per/game on the season, while helping lead his Arcadia team to an impressive 23-4 overall record.  Arcadia HS became one of the hottest teams in the state last season, and Fleming was a major part of the team's success.

This season, Fleming is very much improved and also much physically stronger, and he has yet to pick up a weight.  Fleming is an excellent ball handler and passer, and is a pass-first point guard that enjoys running a team and making players around him better.  He is electric off the dribble and has an explosive first step.  When traveling downhill with the basketball, he is almost unguardable and is able to finish very strong in the lane.  He is a strong finisher in the lane and has an ability to get to the free-throw line quite often, as a result of his aggressiveness.  He also pushes the basketball up the floor to the open man, and is excellent in an up-tempo offensive style of play.

Fleming is also a strong on-the-ball defender that is a capable lock-down defender over time.  He stays in front of his man consistently, and forces the offensive player to almost do what he wants them to.  Fleming also plays passing lanes and puts pressure on opposing passers.

Currently, Fleming is hearing from numerous colleges, but has yet to receive the offer he is looking for college.  His father advised me that he has received a lot of division-I interest up to this point, but that he is looking to reel in much more interest this high school season after a strong senior year.

Fleming's performance in this year's Fall Showcase was among the very best in the event, and suggests that he will be among the top overall prospects in the state for the spring signing period.  I look forward to watching him continue to develop and have a big senior season leading a young Arcadia team to this year's state playoffs.

Fleming is also among the finest young men that you will meet - a student-athlete with very high character, on and off the basketball court.