Jayden Nunn On The Rise 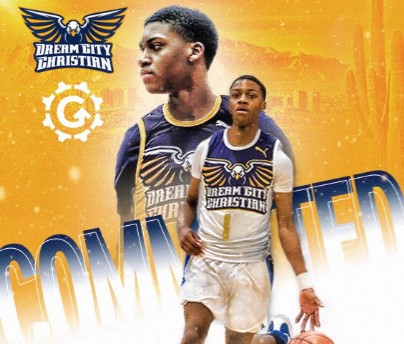 The state of Arizona is officially loaded with many top-rated basketball prospects these days for college coaches to recruit and even marvel at. With so many very good potential prospects now in the state to recruit, for some prospects, it takes a little longer to see their college recruitment begin to soar. Dream City Christian Prep's talented 6-foot-3 senior point guard Jayden Nunn saw his college recruitment take off slowly, before now picking up at an extreme level. The tough and talented guard prospect is now receiving high-major Division-I college recruitment, and has become one of the hottest guard prospects in the country.

After seeing his college recruitment go slowly for some time, while he possessed offers from Rhode Island, Eastern Michigan, Austin Peay, Toledo and Youngstown State, it was thought that he would be leaning towards Rhode Island, but now, as a result of his new level of recruitment, Nunn should begin to now have many options for himself, as numerous high-major college programs are now focusing on him. As a result, this surely will now take his college recruitment to another level. Nunn will now have many options for himself to consider.

Last week, Iowa State extended a big offer to Nunn, his biggest offer to date. With an offer now from a Big-12 Program, many more college programs will soon be in the hunt. University of Kansas has also expressed recent interest in Nunn, but no offer has been extended yet to him.

Nunn is having an excellent year thus far for himself, as he has led his Dream City Christian program to numerous strong performances, and has been very productive in the process. Nunn is among the elite overall guard prospects in the highly competitive Grind Session, and his ability to defend at a high level, while also being able to make plays off the dribble, score the basketball and set up his teammates for scoring opportunities, has been very attractive thus far in the season. Nunn's exploits early this season have made him a prospect on the rise.

A native of Flint, Michigan, Nunn is different, as he is tough and a physical guard with an excellent body and size for the guard position. He can play either guard position, and does not settle for long perimeter shots, but rather enjoys getting into the lane and finishing plays, or creating for his teammates. He is a strong ball handler and passer of the ball - a floor general that enjoys running a team and is very vocal. Nunn's leadership skills and competitive drive make him a valuable asset to his team.

Many college programs will be in the hunt for a pure point guard prospect with size this spring, once the growing COVID pandemic becomes more manageable and college coaches are permitted to focus on rebuilding their programs for next season, while evaluating available high school and juco prospects. The lack of an NCAA Spring and Summer Evaluation period really slowed down and hurt Nunn's college recruitment for a period of time, but his level of talent and ability to perform at a high level have raised college program's ultimate awareness of his potential as a college prospect.