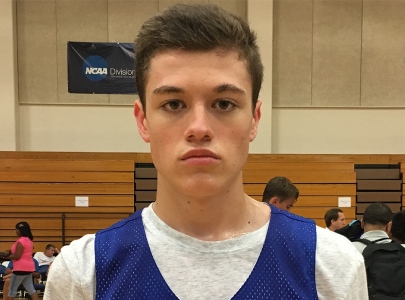 Top Arizona prospects from the 2018 class are quickly falling off the recruiting board now - making their college decisions this fall.  Most prospects in the class will stick around for the late signing period, but some are making their decisions early.

On Tuesday, Brophy Prep High School's talented and sharp-shooting 6-foot-7 senior wing prospect Jaxson Baker was the next in line to make his college decision, as he gave a verbal commitment to Central Arkansas and head coach Russ Pennell and his staff.

Baker had a solid spring and summer for himself, and helped lead his club program, Powerhouse Hoops Black 17U, to a tournament championship at this year's Baylor All-Star Classic in Chicago, Illinois - defeating the historic Mac Irvin Fire in the event's championship game.

Possessing very good size for the wing position and still growing a great deal, Baker has a lot of room for growth and upside - suggesting that he is just scratching the surface of how good he can be over time.

Congratulations to Baker and his family on this commitment.  Baker will sign a national letter of intent with the program in November.

Arizona Hoop Review Scouting Report:  Baker has very good height and length for the wing position, and is still growing a great deal physically - suggesting that Baker has a lot of room for growth and upside.  He is just scratching the surface of how good he can be over time.  He is an excellent shooter of the basketball with terrific range on his shot, and a nice knack for putting up points in a hurry.  He has a quick release on his shot - making it difficult for opposing defenders to guard him on the wing.  He enjoys playing on the perimeter, but as he adds size and strength to his very thin frame, he should be able to score much more effectively around the basket as well - something that would benefit him a great deal at the collegiate level.   He is a mis-match for most opposing wings, as a result of his height and length, but he is at his best as a small forward or 3 on the floor - able to handle the basketball and also make plays off the dribble.  Still needs to continue to focus on becoming a better ball handler over time to develop completely, but he is a fundamentally sound prospect.  A good passer that sees the floor, and is able to look over the defense.  A solid rebounder that needs more focus in this area.  An OK defender that also needs more focus in this area as well to maximize his potential.  A solid overall prospect with upside.