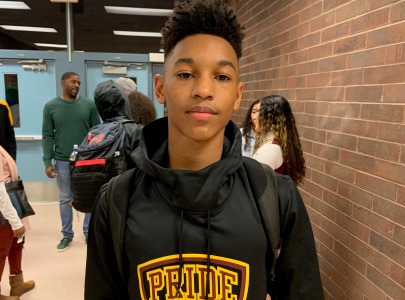 While the 2021 Class across the country was and will not be permitted to benefit from the NCAA Evaluation Period in 2020, many of the prospects in the class have gone unnoticed by college programs. One prospect in Arizona's 2021 Class that is worthy of much higher college recruitment is Mountain Pointe High School's talented 6-foot, 160-pound senior point guard Jason Kimbrough. After a strong junior season where he led his high school program to a 6A State Championship runner-up finish, Kimbrough looks prepared to have a big senior season, when one takes place.

Kimbrough is one of the state's elite basketball prospects, regardless of position, but his recruitment has yet to fully take shape. Simply due to the COVID-19 pandemic and a lack of true exposure to college coaches, Kimbrough has soared below the recruiting radar. He is a superb talent at the point position - a leader with the basketball in his hands. He is and has been a pure point guard prospect and a floor general for Mountain Pointe, and should be able to make an immediate impact at the position for the college program he eventually lands at.

I first became impressed with Kimbrough as a sophomore starter for Mountain Pointe. In a huge win at home over a Nico Mannion-led Pinnacle High School team, Kimbrough absolutely went off, and I marveled at the young man's advanced ability to make plays off the dribble, make shots and apply defensive pressure on opposing guards.

Last season as a junior, Kimbrough was excellent all season and came up big down the stretch for his team, as he willed his team into the 6A State Final, before falling to eventual state champion Desert Vista High School. Kimbrough averaged strong numbers in his junior season, and is set to have a big senior season when his senior season picks up.

Kimbrough is coming off a Top 20 All-Star selection in the Southwest Basketball Camp, and is among the elite point guard prospects in Arizona's 2021 Class. He is a pure point with an excellent handle of the basketball and court vision - allowing him to see the floor well, facilitate for himself and his teammates and create for himself and others off the dribble. Kimbrough is a pass-first point guard prospect that enjoys making players around him better, but is also able to create scoring opportunities for himself when he wants to.

Kimbrough has a good ability to stretch the defense with his perimeter shooting, which he has excellent range on. He has a quick release and is able to get his shot off quite well. His ability to blow past defenders off the dribble sets up his opportunities for perimeter shots, as defenders lay off him. He enjoys getting into the lane, his best attribute, and is a strong finisher around the basket. He has a strong physical frame, and is able to take contact quite well and finish at a high level for himself.

It will be very interesting to see what level Kimbrough eventually lands at in college, since he does have a true position on the floor. Players with true positions can be easier to recruit, since you know what you are getting, but there has to be a true need for the position also.

Whatever program eventually lands this young man, they will be getting a plug-and-play point guard, as Kimbrough is a leader on and off the basketball court. I look forward to watching him play during his senior season, and look forward to seeing his college recruitment begin to take shape, as he is definitely one prospect that is worthy of attention.