Jason Harris Getting It Done, Offers Pouring In 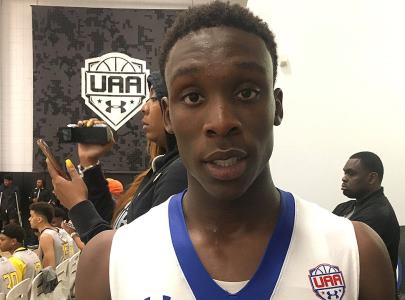 So many of Arizona's top-rated prospects are generating loads of Division-I interest these days. One previous forgotten top-rated prospect in the state was formerly Higley High School's 6-foot-8, 215-pound rising senior forward Jason Harris. After receiving a Top-10 National Player Ranking as a freshman prospect, Harris saw his overall player ranking and recruitment stagnate after suffering an injury during the summer before his junior season. Now Harris is back to form and picking back up where he left off.

Harris is one of the nation's top overall football prospects, so it has been an interesting high school career for Harris, who has college programs recruiting him at a high level for both sports. While it is still unclear as to what Harris will do for college, deciding on football or basketball, or maybe even both sports. He will definitely have his choice though, as this long, lengthy and strong forward prospect is now back to making serious noise on the club circuit.

Harris decided to play this spring with EBO (CA), one of the top club programs in the West and with a lot of success and club history as well. Harris has proven why he was considered as an elite national prospect as a very young performer this spring, as he has played at a high level consistenly in several major events.

As a result, Harris recently received offers from Ole Miss, Texas Tech, UNLV, Arizona State, Florida State and DePaul, to go with a previous Nevada and San Diego State offer. Harris should continue to receive many more offers throughout June and July.

Harris received a huge national ranking by ESPN very early - checking in as the #10 overall prospect in the 2020 Class.  He was selected to participate in the 2017 USA Men's U16 National Team training camp roster. Harris was one of the top middle-school prospects to ever enter into the Arizona high school ranks, alongside other top-rated middle school performers such as Marvin Bagley, Nico Mannion, Matt Carlino and Jerryd Bayless.  Harris entered the Arizona high school ranks as one of the elite overall prospects in the country for his age - ranking as high as #1 player in the country by some national scouting services.

The ceiling for Harris is limitless, and this young man has a tremendous future ahead of him.

I will continue to follow the recruitment of Harris closely, and bring you more recruiting updates as they continue to develop.

Here is a highlight video of Harris from his performance with EBO this spring in an exciting match-up with the Compton Magic (CA) . . .

Arizona Hoop Review Scouting Report:  Harris a very long and lengthy athletic forward prospect with loads of potential for the future, in whichever sport he chooses to play - football or basketball. Harris is regarded as one of the top overall prospects in the country in both sports.  Harris has a very strong physical frame with a long, rangy wingspan that allows him to make plays, rebound and finish strong around the paint. He also possesses a good shooting stroke with a soft touch from the perimeter out to 15 - 18 feet. He also runs the floor hard and is a good finisher in the open floor.  Harris is a very good low post scorer, as he has a nice jump hook and also can turn and face and make plays around his defender.  He is an active rebounder and shotblocker - two nice attributes from a post prospect.  An excellent athlete that runs the floor extremely well and is an excellent finisher in transition.  This young man's potential for the future is limitless - in either basketball or football.