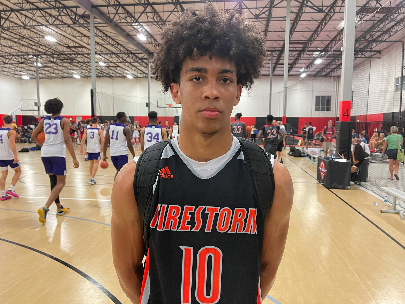 In Breaking News, Arizona Preps has learned and been informed that St. Mary's High School's talented and top-rated 6-foot-4 junior guard Jason Fontenet has decided to change locations for school, and will be leaving defending 4A State Champion St. Mary's High School for a local prep program this fall. I caught up with Fontenet this weekend in Corona, California, while his team was playing in the Battle Zone Live event, regarding his decision to leave St. Mary's after spending two seasons with the Knights, and helping them win last year's 4A State Title.

Fontenet's decision to leave St. Mary's HS is the biggest departure by an AIA basketball student-athlete, since DaRon Holmes (University of Dayton signee) decided last season to leave the state, and transfer to Montverde Academy in Florida. Holmes later returned to Arizona and finished his senior season with AZ Compass Prep - a decision that he should have initially made, which would have allowed him to play in the GEICO Nationals with Compass. Holmes left Montverde at mid-season to return to Arizona, which caused him to be ineligible for play in the GEICO Nationals. Had he been eligible, Compass would have surely won a national championship last season.

Fontenet is the latest departure from the AIA, but he will not be traveling far or out of state. Fontenet has decided to enroll at Bella Vista Prep next fall, where he will play for new Head Coach Gino Crump. Crump took over the prep program last season, during mid-season. He did not coach the team after taking over the program, but will begin his new coaching stint this fall in the Grind Session. While Crump is still in the process of building his team for next season, Fontenet will be a tremendous addition to his prep program.

I caught up with Fontenet regarding his decision to leave St. Mary's, and he advised me that his decision was based on the level of competition that he will face on the Grind Session and in the prep school ranks.

"I felt that I had done all I can do in the 4A Division at St. Mary's," said Fontenet. "I love St. Mary's and my teammates. It had nothing to do with them. I just want to challenge myself by playing against better competition."

Fontenet is currently among the elite prospects in Arizona's 2023 Class in Arizona, and is among the top prospects in the West. He currently has offers from Georgetown, Arizona State, Washington State, Pepperdine, GCU and Portland State. Many more schools are looking to get involved as well, so many more offers will be on the horizon for him.

Fontenet had a terrific spring for himself while playing for his club program, Firestorm Elite 16U. The team only lost one game and had numerous big wins and several tournament championships. This weekend, Fontenet had a strong performance - leading his Firestorm team to a narrow, runner-up Championship finish in the Battle Zone Live event in California. Firestorm would fall to Lakeshow (CA) 69-67, after a basket by Lakeshow in the final seconds of the game. Numerous Division-I coaches attended each of the games played by Firestorm in the event.

A bigger point guard prospect, and a nice combo-guard prospect, Fontenet is a sure-fire future combo-guard prospect, but likes to have the basketball in his hands from the point guard position. He is a play-maker that sees the floor and enjoys getting the basketball to the open man on the floor and also cutters to the basket. He is also able to make plays for himself off the dribble, or create scoring opportunities for his teammates, while penetrating in the lane or around defenders. He pushes the basketball up the floor consistently, and is also a very good scorer of the basketball, when he decides to make plays for himself. He already possesses an excellent frame on his young body, and, as he continues to mature physically, he will realize his true potential as a player. He has a very good mid-range game, and is able to score effectively within the lane and tight spaces on the floor.

For the past two high school seasons, Fontenet was coached by Damin Lopez, also one of the state's best all-time guards. While it seemed that Fontenet would play for Lopez, and help lead the Knights' basketball program to an elite national ranking over time, instead, he will now take his game to the prep school ranks, as many others have and will continue to do. It is definitely a new day in Arizona basketball and basketball around the country, as more and more players are following suit. While this is taking place, it was definitely a surprise to see Fontenet do so, especially when his father was a former star at St. Mary's, but players want to be recruited today and also play at the highest level. As a result, nothing is really a surprise anymore and anything can happen.

While covering the Section 7 event this year, an unnamed high school player advised me that many more prospects will be going to prep schools and leaving their high school programs. No names were given, but I was advised that it in in the works. I had no idea that Fontenet would be one of them, but no one did. All I can say is stay tuned. There is no telling what other top-rated prospects are also considering such a move, but one thing is for sure, the St. Mary's Knights will be looking to repeat as 4A State Champions next season without the services of Jason Fontenet.

I will continue to follow this story and also the recruitment of Jason Fontenet, and bring you more updates as they continue to develop.