Jason Fontenet On Another Level 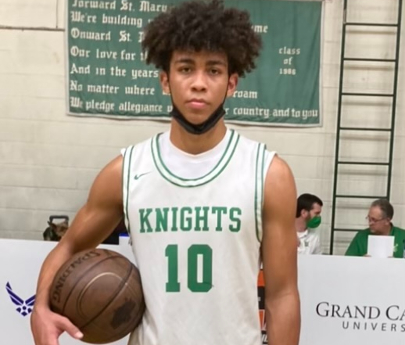 St. Mary's High School's 6-foot-4 rising junior guard Jason Fontenet is on another level and rising in America's 2023 Class of prospects. The gifted combo-guard prospect had a terrific sophomore season in leading his St. Mary's program to an impressive 21-1 overall record, and a 4A State Championship. Fontenet has not slowed down one bit since the high school season. Instead, the gifted and promising talent has taken his game to another level this spring, and has become one of the hottest prospects nationally in the 2023 Class.

Fontenet has played this spring with Arizona Preps' staff member Paul Suber and his Arizona Firestorm 16U team. The team has had tremendous success on the club circuit - winning numerous tournaments this spring, including the Battle Zone and Battle Cup Championships in California recently. Fontenet was the catalyst for the team's success, as they have defeated high-level competition this spring, including the Compton Magic (CA) a couple times this spring. Suber's Arizona Firestorm team/program is currently considered as one of the elite 16U teams in the country currently, and Fontenet has been a major reason for the program's success and developing identity nationally.

As a result of Fontenet's amazing success this spring as a college prospect, Fontenet has now received a couple offers for himself, as Washington State and Portland State have both extended offers to him. Most college programs have not yet heard of or seen Fontenet, so I would expect each of the St. Mary's games at this month's Section 7 event to be full capacity with college coaches looking to catch a glimpse of this young man. I would also expect him to have the most dramatic rise in his college recruitment this summer, as college coaches realize this young man's size, skill level and potential for the future.

A bigger point guard prospect, and a nice combo-guard prospect, Fontenet is a sure-fire future combo-guard prospect, but likes to have the basketball in his hands from the point guard position. He is a play-maker that sees the floor and enjoys getting the basketball to the open man on the floor and also cutters to the basket. He is also able to make plays for himself off the dribble, or create scoring opportunities for his teammates, while penetrating in the lane or around defenders. He pushes the basketball up the floor consistently, and is also a very good scorer of the basketball, when he decides to make plays for himself. He already possesses an excellent frame on his young body, and, as he continues to mature physically, he will realize his true potential as a player. He has a very good mid-range game, and is able to score effectively within the lane and tight spaces on the floor.

I will continue to follow the college recruitment of Fontenet closely, and bring you any recruiting updates as they continue to develop. Look for Fontenet to become a Top 50 national prospect in America's 2023 Class, after his dominant spring performance.