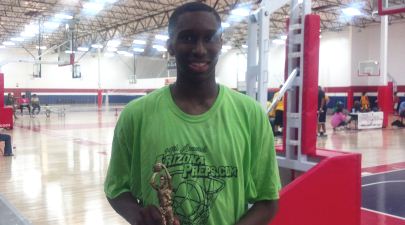 After an amazing event that was absolutely loaded with the majority of Arizona's best basketball talent, no player stood out more on the boy's side of things at this year's 14th Annual Arizona Preps Fall Showcase than Dobson High School's 6-foot-5 senior combo-guard prospect Jaron Hopkins (University of Colorado commit).

Among some stiff competition, Hopkins raised his level of play enough to lead his team in the event to two big wins and one narrow defeat in the competition.  More important than wins and losses, Hopkins' ability to play the game was terrific as he handled the basketball in traffic and in the open floor, shot the basketball with confidence and range and poured in numerous high-flying dunks throughout the tournament.

Hopkins' performance was enough on Saturday to earn him the 14th Annual Arizona Preps Fall Showcase Tournament Most Valuable Player Award.  This performance by Hopkins capped off a recent commitment to the University of Colorado and head coach Tad Boyle.

Once a small guard prospect as a youngster that was overlooked and playing in the shadows of his cousin, Torren Jones (University of Missouri commit), Hopkins has grown to become a fine young man and a tremendous talent for the future.

In all my years of covering high school basketball in the state of Arizona, no player in the state has improved more during their high school years as much as Hopkins.  Hopkins grew significantly over a short period of time and, as a result, saw his game and college recruitment soar.  As an 8th-grader, Hopkins was just barely 6-0 tall and a pure point guard prospect.  Just two years later, Hopkins stood a full 6-5 in height and is now a legitimate combo-guard prospect that is capable of handling the point guard position, while also being able to score the basketball at a high rate from the off-guard position with superior athleticism.

Arizona Hoop Review Scouting Report:  Hopkins is a very talented combo-guard prospect with a variety of offensive skill-sets and superb athletic talent.  He has very good size physically, which allows for him to play both guard positions on the floor legitimately – an attractive feature.  Hopkins also has excellent upside as a player, since he is still growing.  As a point guard prospect, Hopkins has a very good handle of the basketball and a nice feel for the game, although he still needs to improve his decision-making and shot selection to reach his full potential at the position.  He is able to create shots for himself or others, and is a good slasher and finisher in the open floor.  Also a good finisher in traffic and over bigger defenders.  A very good mid-range shooter, but still needs continued improvement in his consistency on his jump shot with range to reach his full potential as a player.  Very good defender with good anticipation that likes to play the passing lanes.  An active rebounder.  Has excellent potential and a very bright future ahead of him.  A very intriguing prospect.  Rated as the top overall prospect in Arizona’s 2013 class.