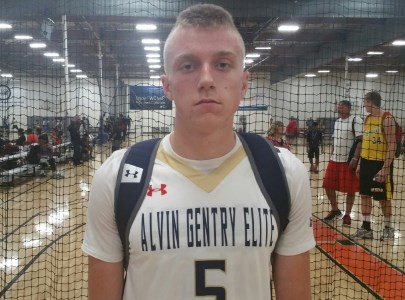 Saguaro High School's 6-foot-5 rising junior guard Jared Martin has become one of the state's better prospects in the 2018 class.  Martin utilized this spring evaluation period to make a name for himself on the aau/club circuit, and as a result, he is now hearing from numerous college programs.

This week, Martin took an unofficial recruiting visit to a local Big Sky program, as he visited the NAU Lumberjacks.  Northern Arizona has expressed considerable interest in Martin early, and he showed them some love this week by visited the school's campus.

Martin played this spring with a new local club program that played very well on the spring circuit, as he competed with the Alvin Gentry Elite club program.  The team is comprised of some of the state's top prospects for the 2018 and 2019 classes, and they competed very well against top-rated competition.  Martin was  major bright spot for the team, and was the team's leading scorer in both spring events they competed in.

Martin is a guard prospect with excellent size and a nice offensive skillset, which allows him to make shots from almost anywhere on the floor.  He has a sweet shooting stroke with excellent range, which makes him very difficult to defend for opposing guards.  He is also able to make plays for himself off the dribble as well, and get to the basket where he is a solid finisher.  He needs to continue to focus on this area of his game, as it will open up the rest of his offensive weapons.

While it is still unclear as to whether Martin has received a scholarship from NAU, if not, one should be coming soon, along with numerous other scholarship offers for the talented guard prospect.

I will continue to follow Martin and his college recruitment closely this summer, as he should become one 2018 prospect that will generate a lot of interest this summer, while heading into his junior season.