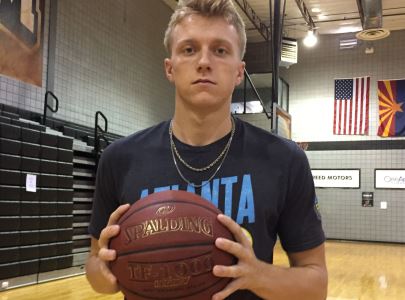 Day one of this weekend's Duel of the Desert prep event on the Grind Session circuit proved to be about the return to the state of Arizona by Prolific Prep (CA) 6-foot-5, 195-pound senior guard Jared Martin (Montana State commit).  Martin decided to leave the state for his senior season for the lure to play for one of the elite prep programs in the West.  On Friday evening, he made his return to the state and led his program with some terrific shooting in a 82-61 win over Taylor Made Prep.

In the win, Martin led the way for his team with 21 points and 5 rebounds, which included a terrific start for him, as he came out very hot and hit 4 of his first 5 three-point attempts in the contest.  Martin looked excellent in the victory and proved why he is considered as one of the very best shooters with size in the West.

Martin gave an early verbal commitment to Montana State University this fall, and looks to be an absolute steal for the Big Sky program and their staff.  Martin had received his share of college recruitment, and decided on Montana State over offers from numerous schools in bigger conferences.  Martin seems to have chosen fit and an opportunity to play over the lure to bigger schools.

Martin was rated by our staff as the best pure shooter of the basketball in Arizona's 2018 class, before leaving the state .  His ability to shoot the basketball, combined with his size, overall offensive skillset and feel for the game, make him a very intriguing prospect.  He has excellent size and a nice offensive skillset, which allows him to make shots from almost anywhere on the floor.  He has a sweet shooting stroke with excellent range, which makes him very difficult to defend for opposing guards.  He is a very good ball handler and passer that sees the floor, making him fundamentally sound - his best attribute as a player.

Martin was also a top performer in this past summer's Southwest All-American Camp - earning a Top 20 selection in the camp.