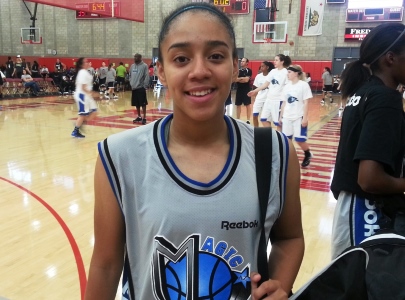 Sierra Linda High School's skilled 5-foot-7 senior guard Janessa Aukward has found a college home for herself and it is with a strong women's basketball program that recently won a national championship.

Recently, Aukward signed a national letter of intent with Mesa Junior College.  The Jackrabbits won this year's Division-II National Championship and have one of the strongest women's junior college basketball programs in the country.

She is a combo-guard prospect that scores at a high rate and is a very skilled guard prospect with a very good feel for the game and excellent overall toughness as a player.  She is a very good ball handler and passer, and also is a good one-on-one defender with quick hands.  She is a also a very good shooter with range on her shot, and is capable of creating her own shot off the dribble.

She will need to continue to work on her ability to make plays for others and run a team to reach her maximum potential as a player.  She has the potential to develop into a mid-major division-I prospect over time.

Aukward competed with the Arizona Magic Elite 17U club program this spring and is the second member of the Magic girl's program to sign a college basketball scholarship this club season.