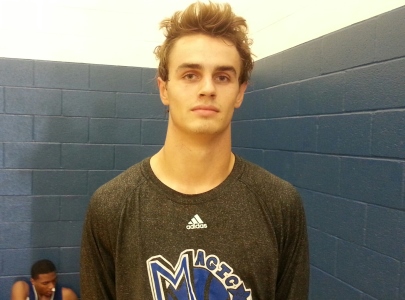 One of the best two-sport athletes in the state, Hamilton High School's 6-foot-6 junior forward James Scoggin is coming off an excellent summer performance, allowing him to now become considered amongst the top overall prospects in the state.

I had not seen much of Scoggin before this summer, so I was anxious to see him perform against much better talent.  I came away very impressed with this young man's ability to play the game and compete at a high level.  While not overly athletic, Scoggin is a skilled stretch four-man with a strong, well-built body, and a nice shooting stroke with range.

Scoggin is coming off an excellent sophomore high school season, as well - leading his program to a 24-4 overall record on the season, and a nice state playoff run.  Scoggin will return this season to team up with 6-foot-7 senior post James Sosinski to give the Huskies one of the biggest front-lines in the state.

Scoggin is also a top-rated tight-end for Hamilton HS as well - playing for the top overall football program in the state.  Scoggin has not indicated what sport he will play in college, but it seems as though he will play basketball at this point in his career.

This summer, Scoggin played for the Arizona Magic - Passion coached by former Arizona State basketball product Justin Allen.  The team was very successful - winning two consecutive tournament titles in a row in major events.  Scoggin was a big part of the team's success, as he played very consistent throughout the summer.

Scoggin's play this summer suggests that he will only continue to get much better over the next two years of high school, and should develop into one of the top overall prospects in Arizona's 2016 class.  He is one of the top true stretch-fours in the class.

Scoggin is one player that I will continue to watch develop closely over the next two years.  Look for him to also make a rise in the up-and-coming 2016 Arizona Preps Player Rankings.