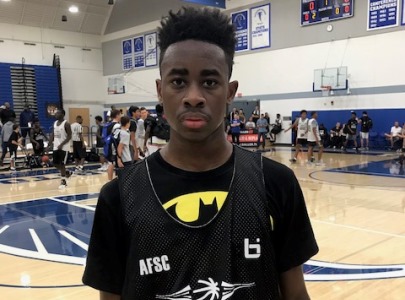 This weekend, the Pangos All-West Frosh/Soph Camp took place @ Cerritos College (CA) over Saturday and Sunday.  Some top-rated Arizona basketball prospects from the state of Arizona were in participation for this year's event.  One prospect that emerged this weekend and made a splash in the event was AZ Compass Prep 6-foot-1 sophomore guard Jalin Anderson.

While our staff was not in attendance for this weekend's event, it was reported by numerous scouts in attendance that Anderson was among the elite performers this weekend, and had an excellent showing in the event.  Anderson ranked among the top overall guard prospects in this exciting event - a loaded field of prospects.  Anderson also ranked among the top individual scorers of the basketball in the camp, actually finishing with a game-high 27 points in one contest.

Anderson is a native of Memphis, TN, before recently moving to the state of Arizona.  He recently enrolled at AZ Compass Prep, where he will participate on the school's national team this high school season.

Anderson is a high-scoring combo-guard prospect with loads of offensive talent in his physical frame.  He has a unique ability to make plays off the dribble and get a basket anywhere from the floor, and whenever he decides to make a play.  He likes to have the basketball in his hands at make plays off the dribble.  He has excellent body control and a change of pace and speed, which keeps defenses guessing and makes it difficult to stay in front of him.  He has a nice shooting stroke with unlimited range, which sets up his defender for strong drives to the basket, where he is an excellent finisher and also draws fouls and gets to the free-throw line.

Anderson is a lethal guard prospect with the basketball in his hands - a strong playmaker that plays with loads of self-confidence in his ability to play the game.  A very good ball handler and passer that is capable of running a team, and also carrying one offensively.  He is an excellent penetrator and finisher in the lane, that uses floaters to score over bigger defenders.

Anderson has very good lateral quickness and quick hands and feet, which make him an excellent defender as well.  He plays passing lanes very well.  Anderson has the potential to become a lock-down defender over time, a valuable asset as a guard prospect.

This weekend was a coming-out-party of sorts for Anderson, who caught the attention of scouts Eric Bossi (Rivals.com) and Gregg Rosenberg (Arizona Varsity), as a result of his play.  The performance by Anderson proved that he is another rising star in Arizona's younger 2020 class, proving the state of Arizona's level of basketball talent is definitely on the rise.