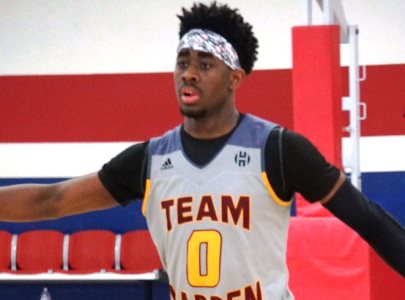 One of the top overall prospects in Arizona's talented 2020 Class is AZ Compass Prep's 6-foot-3 junior guard Jalin Anderson.  Anderson is coming off a strong performance this high school season for himself, where he took over as the team leader on the floor and became the team's top individual scorer of the basketball and playmaker for his team.  Although Anderson is among the state's top individual talents, he has become one of the top sleeper prospects in the class.

Anderson received a Mountain West offer recently, and now he is beginning to see his college recruitment take shape, after the University of New Mexico recently extended an offer to Anderson, his biggest offer to date.  He also possesses offers for himself currently from Grand Canyon, UTEP and Northern Arizona.

Anderson has had a strong spring performance while playing with his Team Harden Adidas-sponsored club program on the Adidas Gauntlet Gold Circuit.  Anderson and high school teammate Xavier DuSell have combined to give the Team Harden team one of the top backcourts in the West, as both prospects lead this year's team.

Last club season, Anderson and Shon Robinson (Ole Miss commit) teamed up on the Jamal Murray Elite 16U team to form one of the most talented young duos in the West.

A native of Memphis, TN, before moving to the state of Arizona, Anderson is a high-scoring guard prospect with loads of offensive talent in his physical frame.  He has a unique ability to make plays off the dribble and get a basket anywhere on the floor, and whenever he decides to make a play.  He is a nice young talent with a very bright future ahead of him.

Anderson has not indicated a leader in hsi college recruitment yet, but his wonderful father, who plays a strong and supportive role in his son's life, advised me that his son would like to find the right fit for himself, and would enjoy a program that wants him the most.

I will continue to follow the recruitment of Anderson closely this spring and summer, and bring you any recruiting updates as they continue to develop.

Arizona Hoop Review Scouting Report:  Anderson is a high-scoring guard prospect with loads of offensive talent in his physical frame.  He has a unique ability to make plays off the dribble and get a basket anywhere from the floor, and whenever he decides to make a play.  He likes to have the basketball in his hands at make plays off the dribble.  He has excellent body control and a change of pace and speed, which keeps defenses guessing and makes it difficult to stay in front of him.  He has a nice shooting stroke with unlimited range, which sets up his defender for strong drives to the basket, where he is an excellent finisher and also draws fouls and gets to the free-throw line.  Anderson is a lethal guard prospect with the basketball in his hands - a strong playmaker that plays with loads of self-confidence in his ability to play the game.  A very good ball handler and passer that is capable of running a team, and also carrying one offensively.  He is an excellent penetrator and finisher in the lane, that uses floaters to score over bigger defenders.  Anderson has very good lateral quickness and quick hands and feet, which make him an excellent defender as well.  He plays passing lanes very well.  Anderson has the potential to become a lock-down defender over time, a valuable asset as a guard prospect.