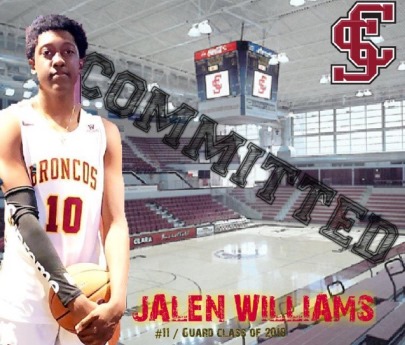 This week when the early signing period began on Wednesday, it was still unknown as to where Perry High School's talented 6-foot-4 senior guard Jalen Williams would end up.  While already possessing numerous big offers for himself, Williams would decide to pull the trigger with Santa Clara University in the West Coast Conference (WCC).

With numerous offers on the table, Williams would decide for Head Coach Herb Sendek and his talented staff of coaches.  Sendek has recruited the valley hard since taking the job in the WCC, and leaving Arizona State.  Williams will now join Mountain Pointe's star post Jalen Graham in Santa Clara's 2019 Class of prospects.

Williams has consistently made a jump in each of our player rankings since his sophomore season, and now his signing with Santa Clara caps off an excellent two years of development as a player.  Williams is among the best pure shooters of the basketball in the West, and he is coming off a very good showing this spring and summer.  The sharp-shooting guard prospect performed at a high level while playing for head coach Paul Suber and his Blue Chips Nation 17U team.

The talented and silky-smooth guard prospect has consistently had strong performances each club season, and always seemed to rise to the occasion.  Williams is regarded by our staff as one of the best overall prospects in Arizona's 2019 class - a nice guard prospect with a high skill level and tremendous upside for the future.

Williams is now set to lead a very talented Perry team to the top of the 6A Division this season, where they will be a favorite this season, alongside defending state champ Pinnacle HS and also state runner-up Mountain Pointe.

Congratulations to Williams and his family on this tremendous accomplishment and also to the Perry and Blue Chips programs.

Arizona Hoop Review Scouting Report:  Williams has an excellent ability to create off the dribble and finish plays with a slick handle of the ball.  He has very good body control and is able to slash between defenders to get into the lane.  Williams also has an excellent shooting stroke with unlimited range on his shot, which keeps defenses honest from anywhere on the floor, and sets up his drives to the basket and his mid-range game.  He has a very quick release on his shot also which allows him to get his shot off.  Williams has a long, lengthy and rangy body with huge feet and big hands, which suggests that he is still growing a great deal.  Williams has extreme upside as a player, which suggests that he will only continue to grow a great deal and could get to be 6-6 in height when it is all said and done.  The amount of upside possessed by Williams is glaring and makes him a very intriguing prospect for the future to me.