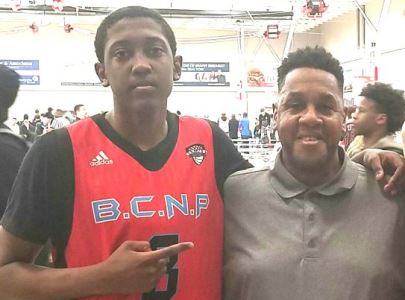 Another prospect that has made a nice jump in our recent player rankings for Arizona's 2019 class is Perry High School's talented 6-foot-4 rising senior guard Jalen Williams.  Williams has consistently made a jump in each of our player rankings since his sophomore season, and now he has seen his performance reach new heights and so has his college recruitment.

On Saturday, Williams would remind basketball enthusiasts in the state just how good he has become, as he would finish with a team-high 42 points in his team's championship victory over 6A State Champion Pinnacle High School in the Monarch Sports Prime Time Basketball Tournament.  Williams is among the best pure shooters of the basketball in the country, and he is setting himself up for a big summer.

Williams is coming off an excellent showing this spring for himself.  The sharp-shooting guard prospect performed at a high level throughout the spring evaluation period while playing for head coach Paul Suber (pictured) and his Blue Chips Nation 17U team.

As a result of the extreme promise that Williams has shown over the past two years, the gifted guard prospect has reeled in numerous scholarship offers for himself already, and will look to garner much more recruiting interest this summer.

Currently, Williams is among the hottest prospects in the West - already possessing offers from San Diego State, Nevada, Santa Clara, UC-Irvine, Portland State, Central Arkansas and Hofstra.  He will soon begin to receive many more offers as the month of July approaches, and definitely during the month of July.

The talented and silky-smooth guard prospect has consistently had strong performances each club season, and always seems to rise to the occasion.  Williams is regarded by our staff as one of the best overall prospects in Arizona's 2019 class - a nice guard prospect with a high skill level and tremendous upside for the future.  While he is a nice looking prospect now, he is still growing a great deal and could get to 6-5 or 6-6 in height when it is all said and done.

I will continue to follow Williams' recruitment closely, and bring you any recruiting updates as they continue to develop.

Arizona Hoop Review Scouting Report:  Williams has an excellent ability to create off the dribble and finish plays with a slick handle of the ball.  He has very good body control and is able to slash between defenders to get into the lane.  Williams also has an excellent shooting stroke with unlimited range on his shot, which keeps defenses honest from anywhere on the floor, and sets up his drives to the basket and his mid-range game.  He has a very quick release on his shot also which allows him to get his shot off.  Williams has a long, lengthy and rangy body with huge feet and big hands, which suggests that he is still growing a great deal.  Williams has extreme upside as a player, which suggests that he will only continue to grow a great deal and could get to be 6-5 in height when it is all said and done, which would intensify his college recruitment immensely.  The amount of upside possessed by Williams is glaring and makes him a very intriguing prospect to me.