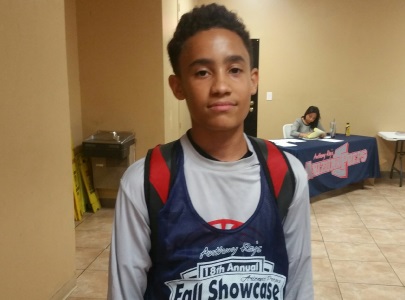 One of the better incoming young freshman prospects in the state is Deer Valley High School's 5-foot-7 guard Jalen James.  While small in stature currently, James is a very skilled and sharp-shooting young prospect with loads of potential for the future.  The son of former Arizona high school and junior college standout performer Tarik James, this younger version of the James' family has excellent promise as a 2020 performer.

Arizona's 2020 class is absolutely loaded with very good prospects across the state.  While several of the prospects in the class are already getting serious division-I attention, James has time for that, and he will need it.  Still very small in stature, James needs a serious growth spurt and he will get it.  His father, Tarik James, was also of similar size at the same age, but then took a major growth spurt between his freshman and junior seasons of high school.  Tarik grew a great deal quickly and saw his game progress immensely.  As a result, the older James became one of the state's elite-level talents.  The younger James has the potential to do the same.

One of the best teachers of the game in Arizona, Tarik has taught his son the Jalen the game since he could first pick up a ball.  While this is not the first time you have heard a story like this, keep in mind, consistently such players produce at a high level.  It just makes sense.  Being around the game and learning from past top performers makes it more realistic that such prospects will produce over time.

James has all the tools from a skillset standpoint, as he has a pure shooting stroke with a quick release and unlimited range on his shot.  His best asset currently is shooting the basketball, which he has no problem getting it off and with a consistent shooting stroke.  A "Steph Curry" type, like Curry James lacks true physicality at this point in hsi young career, but he makles up for it in his skillset.  James can get his shot off almost at will, and has a nice of enough handle of the basketball also that he can create shots for himself and others as needed.

A pure point guard prospect that has a strong ability to score the basketball - again, I expect James' body to catch up to his skills over the next 2-3 years, and when it does, watch out.  This is definitely a serious college prospect for the future.

If his father Tarik James, who is currently an assistant coach at Sagu University (new local NAIA member institution), played in today's world of recruiting and exposure, he would have landed in the West Coast Conference, Mountain West or maybe higher.  The younger James has the same potential over time.  It will take him some time to get there, but I expect great things from this young man.

I will be keeping a very close eye on James for the future, and bring you updates as he continues to develop.