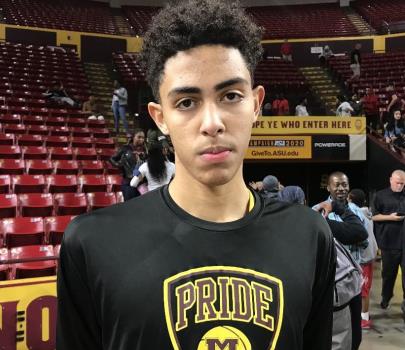 It was thought that the recruiting process was over for talented and gifted Mountain Pointe High School 6-foot-9 senior post Jalen Graham.  After an early commitment to Santa Clara University, Graham decided to wait until the spring signing period to make his decision, and also decided to de-commit - re-opening his college recruitment for college programs to get back in line to land the talented and rising post prospect.

Graham went into the summer with no offers, and quickly became a hot commodity for many college programs around the country.  While it was a large surprise when it took place, rather than accept one of the bigger Division-I offers that he had on his list of schools, Graham chose to give a big commitment to Santa Clara University head coach Herb Sendek and his coaching staff.  For whatever particular reason, Graham has now decided to take a harder look at other college programs, and re-open his college recruitment.

Graham formerly chose Santa Clara over offers from numerous schools such as Oklahoma, Texas Tech, Nevada, Kansas State, Fresno State, Grand Canyon, Boise State and Weber State.  It now seems that those same schools and many others will now look to land the gifted prospect.

Graham received honors this summer while traveling with a loaded and heavily-Nike sponsored Team Why Not club program, as he was selected as the Nike Peach Jam Defensive Player of the Tournament - an amazing honor for Graham.  Graham helped lead Team Why Not to a runner-up finish at this year's Nike Peach Jam on national television - catching the attention of many college coaches in attendance and watching on television.

As a result, Graham became one of the hottest sleeper prospects in America.  No prospect in Arizona's talented 2019 class of rising senior prospects saw their college recruitment soar more this summer, and he has seen the most dramatic rise in our player rankings for the 2019 Class in the state.

Graham is a true gem - a prospect with loads of upside and potential for the future.  He  blossomed into a high-major division-I recruit over the past several months, and saw his stock rise more than any other prospect in the state of Arizona.  As much as we have ever seen.  Graham is a lengthy and athletic post prospect that will only continue to improve a great deal over time.

Graham helped lead his Mountain Pointe team to one of the best high school seasons in the state last season (26-4), and a 6A State Championship runner-up finish - averaging 11 points, 9.1 rebounds and3.4 blocks per/game.  He is already off to an excellent start this season in leading his team to an undefeated record and a pre-season tournament championship, in which he was selected as the Tournament Most Valuable Player.

Graham does still need some work done in the classroom this senior season, and will have the remainder of his senior year to improve his academics, which he has become very serious about over the past year, especially now after receiving so much recruiting attention this spring and summer.

I will continue to follow Graham's recruitment closely this season, and look forward to watching him play this week (Tuesday) when his Mountain Pointe Pride take on defending 6A state champion Pinnacle HS in a rematch of last year's 6A state final.