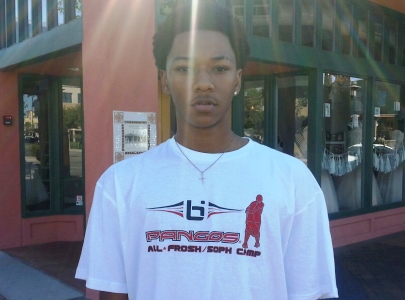 The Gilbert Christian High School program is loaded with basketball talent and has quickly built a basketball dynasty of their own in recent years - much like that of state power Corona Del Sol.  While Corona has absolutely dominated the Division-I ranks, Gilbert Christian has done very much of the same in the lower divisions - first 3A, and now Division-II.

Gilbert Christian is coming off another impressive state championship season this year after finishing 25-6 on the season, and the team will return every major piece to this year's team next season.  While everyone already knows about star 6-foot-9 post Mitch Lightfoot and fellow talented guard prospect Cameron Satterwhite (University of Colorado commit), the team will be returning some gifted young prospects to the equation next season as well, which should have this team eyeing a potentially undefeated season next year.

One gifted young prospect that has many college programs already sniffing around the Gilbert Christian campus is terrific young 2018 prospect, 6-foot-2, 160-pound freshman guard Jaden Lee.  Lee was not a major contributor this season for head coach Kurt Keener, but will be counted on to be a major factor next season.

Lee is a terrific young talent with a skillset beyond his years.  He is a very skilled guard prospect with a nice overall feel for the game, and an ability to put points on the board in a hurry.  Lee is very athletic with a lot of pop to his body, and is capable of scoring from anywhere on the floor.  One of the better guard prospects I have seen in a long time at such a young age.

Lee also plays his club basketball for the Arizona Power club program.  While also playing for such a dominant high school program with several top-rated prospects, Lee has benefited nicely from the college recruitment of Lightfoot and Satterwhite.  Soon he will be able to garner his own recruitment from many top-rated college programs, as he is among the very best 2018 prospects in the state.

Look for Lee to develop quickly into one of the elite overall prospects in the state of Arizona - a state that is quickly blowing up with gifted basketball prospects for college programs to recruit.

Arizona Hoop Review Scouting Report:  A big-time young prospect for the future that is very impressive already and should only develop a great deal over time.  Lee is a very athletic guard prospect that is capable of making a highlight reel play almost at any time in the game, as he is a fundamentally sound performer with a high skill level.  An excellent shooter of the basketball with a very pure shooting stroke and unlimited range on his shot.  Capable of making shots from deep or taking defenders off the dribble and finishing in the lane or at the rim. A very good ball handler that can play both guard positions when needed.  Very good in the open floor.  Has the potential to become one of the state's hottest prospects and a big-time prospect in the West.