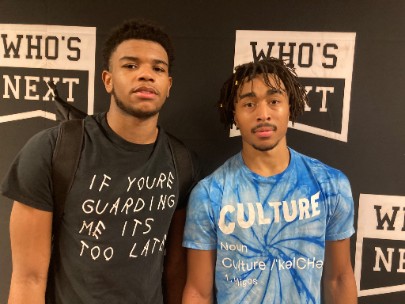 If you are a true Hoops fan there was no better place to be than in Phoenix last weekend for The Border League. It gave fans the opportunity to see many top prospects shine bright on a huge platform, provided by national televised games on ESPN. No star shined brighter than senior guard Jaden Hardy (pictured left) who put on a show to start his senior season off with a bang.

Already a consensus Top 5 recruit in the 2021 class, Hardy performed like he had a point to prove. Taking on national power houses Minnehaha Academy (MN), Prolific Prep (CA) and IMG Academy (FL), Hardy was able to lead his team to a championship appearance.

Throughout the tournament, Hardy displayed an offensive game beyond his years, by using NBA-level footwork and range to average over 31 points per game. A lot of top recruits can average numbers like this, but not as efficiently as Hardy. In his team’s win against Prolific Prep, he scored 46 points on 13 of 26 from the field, and 9 of 17 from three.

What makes Jaden such a devasting match-up is his ability to score from four levels. He is the definition of in-the-gym range. He made several long range bombs, a couple feet away from the three-point line. He can be dominant in pick-in-roll situations, where he can knockdown shots if his defender goes under, but can also split the screen to finish with a mid-range jump-shots or a layup at the rim. As talented as he is with the ball in his hands, he is also a catch-and-shoot threat with a quick trigger.

If this is how Jaden Hardy plays during the pre-season, I can only imagine how he will look in mid-season form. If this offensive display is what he has in store for this season, it will be very tough for ranking publications to not give him a look for the honor of being the number one player in the nation.