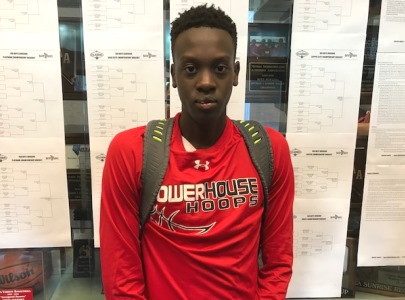 One of the top overall prospects in Arizona's 2019 class emerged this club season while playing for the Powerhouse Hoops program on the club circuit.  Tucson's Amphitheater High School's 6-foot-3 rising junior guard prospect Jackson Ruai is one of the state's most athletically gifted talents in the 2019 class.  For his efforts this club season, Ruai earned two scholarship offers for himself.

First, Ruai would receive an offer from Grand Canyon University and their hard-working staff - a very nice offer for Ruai.  Grand Canyon is focused on bringing in top-rated talent for the future of their program, so this commitment to Ruai is a major one.

This weekend, Ruai, alongside several other 2019 prospects in the state, would receive an offer from Houston Baptist University (HBU).  Houston Baptist has made a commitment to recruiting the state of Arizona hard over the years.

Ruai is an electric guard prospect with a long, rangy body and excellent quickness and athleticism.  He plays much bigger than his size suggests as a result of his length and bounciness off the floor.  He is a good shooter of the basketball with range on his shot, and can create his own shot effectively off the dribble.  He is an excellent finisher in traffic and in the open floor, an area of his game which will really develop over time as he matures physically.  He is an excellent defender with good court anticipation and is able to play passing lanes effectively for steals and transition baskets.  He has the ability to become a lock-defender over time.

He also is capable of playing both guard positions on the floor, although he is at his best as a scorer from the off-guard position.  He does like to have the basketball in his hands and make plays for his team.  While he should grow still a great deal over the next two years, he should be able to play both backcourt positions over time.

I look forward to following Ruai over the next year, and expect him to become a nice recruiting target for many college programs throughout that time.

Houston Baptist heavily followed both the Arizona Power and Powerhouse Hoops club programs this summer throughout the club circuit.