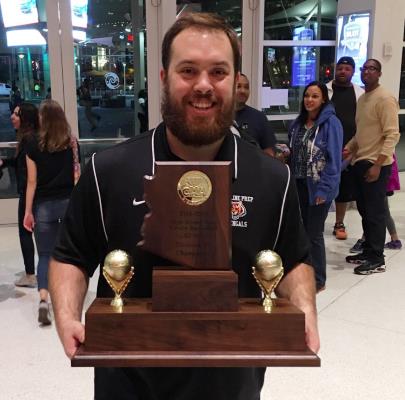 Many high school coaches across the state and the country are making a difference in their communities.  None more than Skyline Prep High School's head coach Jace Romero who has revitalized a community - providing an opportunity to young men that many do not believe in.

The Skyline Prep program is located in South Phoenix, a place where once the sport of basketball thrived in the 1970's and 80's.  Over the years though as housing developments have grown around the state, many people have moved out of the area.  Jace Romero was raised in the South Phoenix and never left.  Instead, he has become a pillar in the community.

Only 25 years of age, Romero took over the head coaching position at the Skyline program 4 years ago, after coaching at the middle school much earlier.

"The job was given to me after the former head coach left the school," said Romero.  "It fell into my lap.  It was unexpected."

Since taking over the program, Romero, who is highly respected by many people in the area for his commitment to the kids, began helping the young men at the school, and also providing opportunities were there were none before.

"I believe in these kids," said Romero.  "A lot of these kids have a lot of adversity to overcome just to get to school everyday.  I do a lot."

Romero has done it all for his kids.  He picks kids up almost daily, drives them home and even has had younger kids live with him.

Romero has even heard from some college coaches that they do not want kids from South Phoenix, but that has not stopped his pursuit.  Instead it has motivated him much more.

This high school season, Romero won the CAA Division-III state title, after defeating state power Tri-City Christian in the state championship game.  After losing to Tri-City in fine fashion (72-47) during the high school season, Romero would lead his team to a championship victory in fine fashion at the Talking Stick Resort Arena in front of a nice crowd of fans.

It was a story of David vs. Goliath, as Tri-City Christian (21-2) was the most talented team and program in the state's CAA ranks.  Led by the play of 6-foot-9 senior post Nigel Shadd (Kansas State signee) and 6-foot-7 sophomore guard/forward Walter Talley, Tri-City had an immense lineup - much bigger than Skyline Prep's.  Skyline Prep (22-4) had a much smaller team, led by the play of numerous guards that play with an intense, fast-breaking style and enjoy shooting the basketball from anywhere on the floor.  Their aggressive offensive style of play would work to ignite Skyline in the state final, as they would come out to take a big 14-point lead, 27-13, by the end of the first period.

"I told our team that if it felt good then shoot the basketball," said Romero.

For the amazing job that he did this high school season, Romero was selected as the CAA Division-III Coach of the Year - an amazing honor for a very young man that has given his all to his program.

Romero has now built a program at Skyline Prep that his school and fans can be proud of.

"We will be better next season than we were this season," said Romero.  "We will be quicker."

Romero is still trying to land a college for his seniors from this past season, and has worked hard to find college programs for his young men, while also staying on top of their academics.  He is still looking to land a home for seniors Jamez Pearson and Seth Taylor, while also preparing his juniors for their senior roles next season.

The Skyline Prep team will be very talented next season, as the team will feature some of the state's top junior prospects - 6-foot junior guard Lemaica "Mako" Westbrook and 6-foot-4 junior wing Devonte McKinney are two of the state's top talents in the 2018 class, and should begin to garner recruiting attention.  5-foot-7 junior guard Cameron Campbell is another superb talent with a nice skill level, and 5-foot-9 junior guard Kobe Taylor is a lock-down defender and a good scorer of the basketball.  Campbell and Taylor were both instrumental in the school's first state title win.

For Romero, this is just the beginning for a program that has come a long way.

"I want to keep it going," said Romero.  This will be my fourth year next season and we still have a lot of work to do."

I applaud Romero and others like him that do it for the love.  Rarely do you find someone so young that has done so much already for his community.  This is what it is all about.  Romero is a constant  the young men he is contact with can depend on.  He doesn't change.  Romero will continue his pursuit of making a difference in his community, even if others don't believe in the kids there - he does.

While I was speaking with Romero during his program's open gym, he was flooded with young men that kept coming up to him to give him a hug.  And not just his current players, but past players that continue to stay around the program and return to the school to show support to the coach that they love.

This has become his ministry.  Making a difference in the youth of South Phoenix.