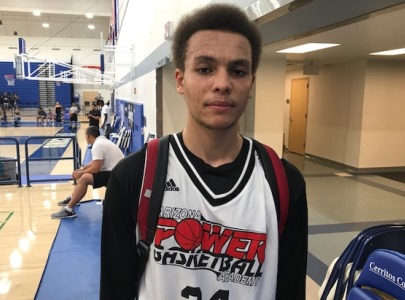 Rhymes is preparing to enter into his final senior season, after a very nice junior season for himself, where emerged into one of the state's elite performers.  Last season, Rhymes led his team to a successful 16-11 overall record on the season - averaging 17.7 points and 7.7 rebounds per/game.  The school's performance was a nice improvement from a year ago when the team finished with a 14-13 overall record.

Rhymes is a skilled combo-guard prospect with a long frame for his size and good overall versatility as a player.  He is able to play both guard positions on the floor, but is at his best from the scoring guard position where he likes to put up shots and score the basketball - his best attribute.  He has a good shooting stroke with range and a quick release on his shot.  He is a good ball handler in the open floor, and can create scoring opportunities off the dribble for himself, but still needs to continue to focus on making players around him better.  He is a very good rebounder for his size, and does not mind getting on the glass, a nice attribute for him.

Rhymes is a solid defender but needs to continue much more in this area of his game to maximize his potential as a player.  He has good lateral quickness.  As he adds physical size and strength to his thin frame, his game should really develop overall over time.

Rhymes is another member of the best basketball family in the state of Arizona.  Historically, the Rhymes' family has produced some of the state's best high school basketball talent over the years,  This version of the Rhymes' family is now holding it down for the Falcons' basketball program that is still led by another member of the Rhymes' family, and one of the state's best coaches of all-time, Argie Rhymes.  I am very proud to see that Coach Rhymes is still in control at Carl Hayden, and that his grandson is making him very proud with his play and production, on and off the court.

I will continue to follow the college recruitment of Rhymes closely during his senior season, and will bring you any recruiting updates as they continue to develop.