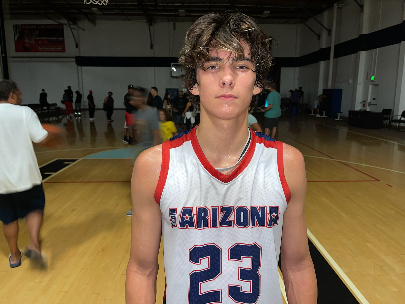 It is obvious that Northern Arizona University Head Coach Shane Burcar and his men's basketball staff has made a tremendous commitment to the state of Arizona's basketball community. After already landing several other top-rated Arizona prospects over the last couple years, NAU has now received a commitment from one of the top point guard prospects in Arizona's 2023 Class, as Campo Verde High School's very talented 6-foot-2 senior point guard Isaiah Kai has given his verbal pledge now to also be a part of the rising NAU basketball program.

I have spoken about Kai and his ability to play the game for some time, as well as how underrated a prospect that I have felt he is. Kai has been one of the most underrated prospects in Arizona's 2023 Class for some time, as I believe he is one of the most cerebral point guard prospects that I have seen, as he also possesses excellent work ethic, on and off the court. Kai is an excellent guard prospect with an excellent feel for the game and an ability to make players around him much better. This young man is one of my favorite prospects, as he is also an excellent teammate and a great student-athlete with high academics.

Kai's commitment to NAU is another big commitment, I believe, for the NAU men's basketball program, as they have reeled some top-rated talent already this fall, also preparing to sign Brophy Prep's talented 6-foot-6 senior wing Arman Madi as well this fall, during the early signing period. This commitment to recruiting Arizona's top prospects is awesome by the NAU program, as I believe they are signing some very good prospects, to go with Sunnyslope's Oakland Fort, Scottsdale JC's Xavier Fuller and PHH Prep's Will Coates, who are each suiting up for the Lumberjacks this college season. I have believed NAU could win with recruiting some of Arizona's best talent, and while the hard-working Burcar has attempted to do so previously, he is now reeling in some of the state's best talent, and it is a nice sight to see.

Congratulations to Isaiah Kai and his family on this accomplishment for himself, as well as the Campo Verde High School basketball program, and also the Team Arizona club program. Good luck to Kai and his teammates this high school season.

Arizona Hoop Review Scouting Report: Kai is a Division-I talent for sure. He is an excellent athlete that works tirelessly on his game, unlike any prospect that I have seen or even heard of over the last decade. He is committed to his love for the game and playing at a high level. He is a special talent, as he sees the game at a different speed and sees plays before they happen - a rare find among today's prospects. As a result of the manner in which he plays the game, he has personally become one of my favorite prospects to watch play. Kai is a unique guard prospect - a pass-first point guard prospect that sees plays before they happen on the basketball court. He has a very unique feel for the game and enjoys having the ball in his hands and also loves to make his teammates better. He advances the ball up the floor with the pass and is an asset to his team, as he plays very hard and competes hard on both ends of the court. He plays with excellent passion and has good overall toughness for his smaller size. Kai is a floor general with the basketball in his hands and loves to get others involved. He also has a pure shooting stroke with excellent range on his shot, and a quick release. He is very crafty with the basketball and can score in a variety of ways, including using floaters in the lane and also scoring from mid-range, an area of his game which should really develop over the next two years. Kai drives very hard to the basket and is a very strong finisher in the lane and over and around defenders. He does not mind physical contact, and often draws fouls and gets to the free-throw line. This young man has a good ability to get defenders off balance with his drives and hesitation dribbles, and has some extra stuff in his bag, which makes him very different from most other guard prospects. He is also a very good defender with quick hands and feet. He is capable of playing passing lanes and deflecting passes at a high rate, which will benefit him nicely at the collegiate level. He has the ability to become a very good defender over time.