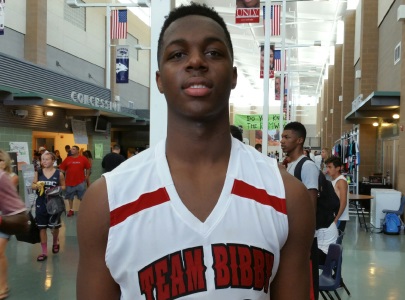 Let's take a look at some of the lesser known prospects in the state that emerged this club season.  These prospects had good performances on the club circuit with their respective teams, and are prospects that I believe made a strong case with college programs to begin to recruit them.

One of these prospects is Shadow Mountain High School's 6-foot-7, 235-pound rising senior post Isaiah Jones.  A native of Austin, Texas, before he moved to the state of Arizona just a year ago, Jones is a wide-body post prospect with excellent size and girth to his large frame.  Jones' performance all club season impressed me, as he played strong on the glass and finished strong around the basket.   As a result, I believe Jones to be a very underrated prospect in Arizona's 2016 class, especially for college programs looking for low-post size and help.

Jones is a valuable member of the Shadow Mountain team, and while he does not post big numbers and is not counted on to score many points, Jones is a nice talent that is still developing offensively.  What he is right now though is a force in the paint that uses his wide-body and lower-body physical strength to gain excellent inside post position for rebounds and offensive put-backs.  Jones' commitment to playing inside the paint also makes him a nice target for penetrators to the basket, resulting in easy low-post baskets for his team.  He also is physical and uses his large body to his advantage - something many post players aren't able to do with prowess these days.

Jones spent his first season at Shadow Mountain HS last season after moving from Texas during the spring of 2014.  Jones would average 8.8 points and 8.4 rebounds last season on a team that finished with a 23-7 overall record last season.  Jones provided good post play for the Matadors, after the program lost star forward Carlos Johnson (moved to California).

This club season, Jones played strong inside for a smaller Team Bibby club program that was the class of the club teams in Arizona for 2015 - winning several tournaments and also the Arizona Club Basketball League (ACBL).

Jones is an excellent post prospect for a low to mid-major division-I college program, and also is a good overall sleeper prospect in Arizona's 2016 class - a lesser known or recruited prospect that would make the college program of his choice very happy.  Jones is not offensively polished, but the value that he brings to a team is very important in today's game of prospects that like to score.  Jones does the dirty work and does not need plays ran for him.  He is always around the ball and gives up his body for the sake of his team winning ball games.

Jones need to improve his ability to shoot the basketball from longer ranges and also become more consistent in his ability to make shots.  He also needs to continue to run the floor harder to get easy baskets in transition, while also becoming an even better finisher inside against bigger defenders, although he won't see many in high school.  In college, these attributes will help him to become more successful over time.

Currently, Jones has flown well below the recruiting radar, but his performances this club season should have many college programs very interested.  Top-rated West Coast scout Gerry Freitas was one of scout who was very impressed with Jones' play in Vegas last week.

I will continue to follow Jones' recruitment closely, and bring you any updates as they continue to develop.