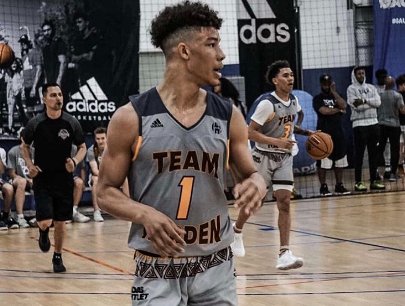 One of my favorite prospects is set to have a breakout season in the Arizona Commmunity College Athletic Conference (ACCAC) this junior college season. Scottsdale Junior College will be very talented this season and will look to repeat as Division-II Champions. Head Coach Mark Bunker has retooled for the up-and-coming season, and his team's success will benefit a great deal from the overall play of 6-foot-3, 190-pound sophomore guard Isaiah Floyd. Floyd had a nice freshman campaign for Scottsdale, and I expect him to do big things this sophomore season.

Last season, as the season began, it seemed that Head Coach Mark Bunker would have his work cut out for him, as he put a team on the floor, after a COVID-stricken season, that lacked any true size. Coach Bunker would make the necessary adjustments needed to allow his lineup to flourish, and it would pay off extreme dividends for the program, as Scottsdale would win the ACCAC D-II Conference Title - finishing with a 19-13 overall record and a 11-9 record in the conference.

Lacking any true size, Bunker would relinquish the reigns to his terrific backcourt duo of Carson Kelly and 5-foot-10, 165-pound rising sophomore guard Unisa "UU" Turay. The gifted duo would become one of the best and hottest backcourts in the national junior college ranks, as the two guard prospects would combine to average 36.1 points per/game, and ranked as the 3rd and 4th best scoring leaders in the Conference. Both guards also ranked among the top leaders in the conference in three-point shooting - shooting better than 40% from three-point distance. The two guard prospects would become a force in the ACCAC - leading Scottsdale Junior College to the Division-II National Tournament.

Kelly and Turay would get excellent help from Isaiah Floyd, as he would have a nice freshman season as well - averaging 11.2 points and 3.5 rebounds per/game. Floyd would start (19) of (21) games on the junior college season for Bunker and his staff as a freshman. Floyd will be back as a sophomore with loads of experience now, and I expect him to have a big breakout season, as a result.

A product of AZ Compass Prep, Floyd is a big-time athletic talent that competes hard on both ends of the floor and is a true lock-down defender - his best attribute as a player. His athleticism is glaring, as he uses his extreme explosiveness and overall athleticism to become a playmaker and make plays that many players are unable to make, due to his extreme bounce off the floor. Floyd can be relentless as a defender and high-energy performer that competes at a high level. His tenacity on defense and on the glass, help him to generate offense for himself. He is a unique prospect that as his shot falls from the perimeter, it opens up his entire game. Floyd has improved his shooting stroke over the past several years also, so he should have a nice season, as he compliments the play of Kelly, Turay and new 6-foot-8 sophomore transfer Isaiah Broady.

Floyd is definitely a nice sleeper prospect for a Division-I program looking for an athlete that has the ability to defend at a high level. I have watched this young man play for several years now, and have always been impressed with his potential. He is a tough kid that works hard and will benefit a great deal this junior college season from the level of talent that will surround him at Scottsdale JC.

Look for a big year from Floyd and the Scottsdale program.