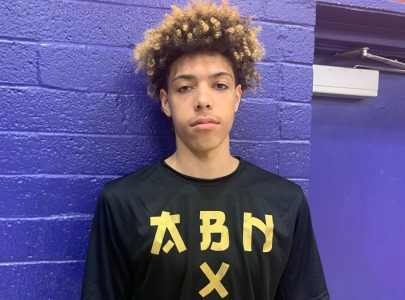 There are so many good basketball prospects now in the state of Arizona, and one prospect that you definitely need to get to know is Chandler High School's gifted 6-foot-7 junior wing prospect Isaiah Broady. After playing in the charter school ranks as a sophomore, Brody has changed locations and now will suit up for a very talented Chandler team this season - instantly becoming one of the state's top overall prospects in the 2021 Class.

I watched Brody last high school season as he led his charter school program to a strong playoff finish, and had no idea that I would soon be watching him suit up for an AIA member program just months later, but this young man has developed as much as any player in the state over the off-season, and now has become one of the state's best overall prospects.

Brody has had numerous college programs begin to already notice him as a serious college prospect, and this summer he received two very nice scholarship offers when UC Santa Barbara Head Coach Joe Pasternack and his staff extended a scholarship offer to him, and then he also received an offer from UC-Davis - two nice offers for a rising junior prospect. And look for many more college programs to begin taking notice of Broady as well, especially as he now enters his junior season as one of the state's elite overall prospects, and leads a very talented Chandler High School team that will compete this season for a 6A State Championship.

Broady returns for his junior season as a much improved overall prospect for the future, as he has grown physically and has also develped his overall offensive skill level, as his shot is very consistent now with range, and he has also become much more of a playmaker now that commands the attention of all team defenses. He is able to extend the defense with his pure shooting stroke and his long, lengthy frame allows him to play as a guard and see over the defense, where he is able to make plays for others whe he has the basketball in his hands.

Broady is still developing as a player and has very good upside as a player, suggesting that he should only get physically stronger over time and also continue to grow physically. He has as much upside as anyone in the state currently, and I believe that he has the potential to become a very serious recruiting target for many mid-major plus division-I programs over the next year.

Broady will now lead a very talented Chandler team this high school season, that will be able to compete with the likes of Millennium, Desert Vista, Perry, Chavez, Mountain Pointe and other top-rated 6A teams in the state.

Look for Broady to have a big junior season for himself in the AIA ranks, and also continue to raise eyebrows of many college programs throughout his junior season. He has definitely become one of my favorite prospects to watch perform in the state, and he has loads of potential for the future.

Arizona Hoop Review Scouting Report: Brody is a longer, rangy wing prospect that is able to play as a bigger guard or wing prospect. He has a high skill level and is able to make plays for himself and others off the dribble at a high level, as he plays with a good motor and looks to be aggresssive offensively with the basketball. He is a very good ball handler and is able to play as a lead guard within the offense, and also has very good court vision and is a playmaker. He sees cutters on the floor and looks to get the ball to the open man on the floor, while creating space for the defense with his pure shooting stroke and lengthy range on his shot. He has unlimited range, an attractive aspect of his offensive skillset. A solid rebounder although I would like to see him focus much more on this area of his game. An active defender that is capable of playing passing lanes, as a result of his length, but needs to focus more defensively over time to reach his potential as an overall prospect. A very good overall prospect with tremendous upside for the future, that could see much higher recruitment for himself.